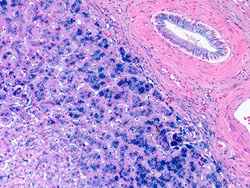 U.S. scientists have noted a remarkable progress in developing medications for hemochromatosis and other diseases involving excess accumulations of iron.

Hemochromatosis is basically a hereditary disease characterized by improper processing by the body of dietary iron which causes iron to accumulate in a number of body tissues, eventually causing organ dysfunction. It is the main iron overload disorder.

The study which has been explained in the current issue of the Journal of Medicinal Chemistry has Raymond Bergeron and colleagues at the University of Florida explain that current treatments remove only small amounts of iron from sensitive organs such as the heart. Treatment sometimes must continue for years to remove enough iron to prevent organ damage.

Now the researchers report the synthesis and early testing in laboratory animals of a possible new generation of iron chelating drugs — compounds that remove excess iron from the body. Apart form working more efficiently than existing medications, the new compounds target specific organs such as the liver, heart and pancreas that are most vulnerable to iron-overload damage.

Early Symptoms of Hemochromatosis
Early indications of hemochromatosis are often like those of other diseases and include the following symptoms:

As iron builds up in the body organs, hemochromatosis may also produce the following symptoms:

Advanced Symptoms of Hemochromatosis
As the disease progresses, hemochromatosis may cause the following more serious problems: