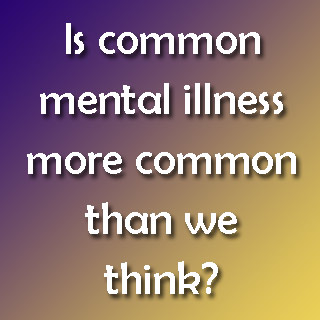 People greatly seem to under-report the amount of mental illness they’ve experienced when asked to recollect their history years after the fact. At least this is what researchers from the Duke University claim.

The occurrence of anxiety, depression and substance dependency could possibly be twice as high as the mental health community has been led to consider. However, it depends on how one goes about evaluating.

For the purpose of better understanding this criterion, Duke University psychologists Terrie Moffitt and Avshalom Caspi along with their colleagues from the United Kingdom and New Zealand made use of a continuous tracking analysis. In order to accomplish the conclusion, this investigation examined more than 1,000 New Zealanders from birth to age 32.

Moffitt was of the opinion that however such self-reporting from memory appears to be the basis of much of what we know about the occurrence of anxiety, depression, alcohol addiction and marijuana dependence. Moreover, longitudinal studies like the Dunedin Study in New Zealand that have tracked people over time were noted to be rare and expensive.

“If you start with a group of children and follow them their whole lives, sooner or later almost everybody will experience one of these disorders,” says Moffitt, the Knut Schmitt-Nielsen professor of psychology and neuroscience at Duke.

Jane Costello, a professor medical psychology at Duke who runs the study claimed that The Great Smoky Mountains Study, a similar effort based at Duke, is known to have tracked nearly 1,400 American children from age 9-13 years into their late 20s. Apparently, they found identical patterns.

Costello stated that, “I think we’ve got to get used to the idea that mental illness is actually very common. People are growing up impaired, untreated and not functioning to their full capacity because we’ve ignored it.”

Supposedly, the incidence of mental illness has been ardently debated by policy makers, mental health providers, the pharmaceutical and health insurance industries for many years.

The best retrospective studies namely the US National Comorbidity Surveys (NCS) and the New Zealand Mental Health Survey found that the incidence of depression from ages 18 to 32 years seem to be at a rate of approximately 18 percent.

However, they appear to have been completely criticized by some for their rates being too high. The latest analysis from the Dunedin Study found nearly 41 percent of that age range could possibly have experienced clinically considerable depression.

Similarly, the survey studies are believed to have reported about 6 to 17 percent lifetime rate of alcohol dependence between ages 18-32 in contrast to nearly 32 percent in the Dunedin Study.

Guidelines published by the American Psychiatric Association are believed to have set the bar for defining what is and isn’t a treatable illness. Additionally, the guidelines for these illnesses are presently being revised by modifying the authoritative Diagnostic and Statistical Manual of Mental Disorders (DSM).

Moffitt further stated that, “Researchers might begin to ask why so many people experience a disorder at least once during their lifetimes and what this means for the way we define mental health, deliver services and count the economic burdens of mental illness.”

On one hand, it may perhaps be argued that the diagnostic standards appear to have been set too low if several people can be considered mentally ill. On the other hand, perhaps these findings argue for more and better mental health care because the disorders seem to be more common than anyone had realized.

“There are two opposing camps, and I’m agnostic about that,” adds Moffitt.

He anticipates that given the findings of these longitudinal studies, the severity of the diagnostic criteria could perhaps require reconsideration.

The research findings have been published in the journal Psychological Medicine.