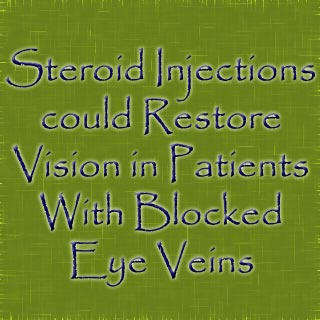 Retinal vein occlusion (RVO) is supposed to be a common vascular disorder of the retina and is said to be one of the most general causes of blindness after diabetic retinopathy. Bearing this topic in mind, two studies claim that injecting the eye with the corticosteroid triamcinolone seems to be effective in apparently improving the vision of a few patients with retinal vein occlusion. This problem may be an outcome from blockages in the blood vessels in the retina.

A 1-milligram dose of triamcinolone could possibly be a treatment choice for particular patients with obstructions in the main part of the retinal vein. Present laser therapies may seem to be greater for those with blockages in smaller branches of the vein.

The SCORE (Standard Care vs. Corticosteroid for Retinal Vein Occlusion) Study Group apparently conducted a clinical trial to better understand this. Apparently the trial involved about 271 participants with macular edema from central retinal vein occlusion. Of these 271 subjects, roughly 92 were supposedly allotted to receive 1 milligram of intravitreal triamcinolone which could be injected into the eye, approximately 91 supposedly received a 4-milligram dose and about 88 were claimed to be allocated to an observation group that did not receive treatment.

For 12 months, the subjects were apparently evaluated for every four months, and those in the triamcinolone group received more injections at every follow-up visit unless there may be a particular reason not to re-treat them. For example, it may mean unpleasant events or a supposed success of the treatment. Through 36 months, more follow-up data was apparently collected yearly, even though the entire 24-month and 36-month result evaluation was supposedly not available for analysis.

Possible bad events may be related with corticosteroid treatment. They could be akin to the observation and 1-milligram group but supposedly higher for the 4-milligram group.

The authors commented, “The superior safety profile of the 1-milligram dose compared with the 4-milligram dose, particularly with respect to glaucoma and cataract, renders it the preferred dose. Intravitreal triamcinolone in a 1-milligram dose and following the retreatment criteria used in this study should be considered for up to one year, and possibly two years, in patients with vision loss associated with macular edema secondary to central retinal vein occlusion who have characteristics similar to the participants studied in this trial.”

In a second study, the same group contrasted the well being and efficiency of triamcinolone with standard care which claims to be grid photocoagulation in eyes without hemorrhage, or deferring photocoagulation until hemorrhage clears about 411 patients with macular edema from branch retinal vein occlusion. Roughly 137 people were supposedly allotted to receive standard care. Approximately 136 were claimed to receive a 1-milligram dose of intravitreal triamcinolon. About 138 were supposed to receive a 4-milligram dose. Akin to the central retinal occlusion trial, subjects were supposedly assessed and re-treated as specified every four months.

Undesirable event rates appeared to be more in the 4-milligram group.

After one year, it was apparently seen that about 29 percent of subjects in the standard care group, roughly 26 percent in the 1-milligram triamcinolone group and approximately 27 percent in the 4-milligram group apparently experienced better vision.

These two studies were published in the September issue of Archives of Ophthalmology, one of the JAMA/Archives journals.