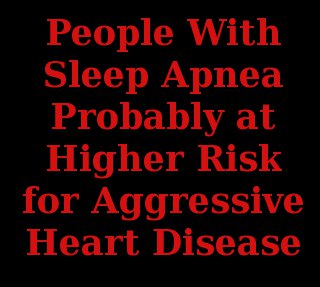 Obstructive sleep apnea (OSA) is a sleep disorder apparently triggered by obstruction of the upper airway during sleep and usually linked with snoring. If the National Heart, Lung and Blood Institute is to be believed then, approximately half Americans reporting OSA are overweight. A groundbreaking study now suggests that OSA patients associated with obesity have more non-calcified or bad plaque in their coronary arteries.

Investigators claim that individuals with OSA have a greater risk of developing an aggressive form of atherosclerosis. Such patients probably have impaired blood flow and more chances of going through cardiovascular events. The study was carried out on 49 obese patients having a mean age of 61 years and a mean BMI of 33. A total of 46 obese patients without the disorder and a mean age of 60 years as well as mean BMI of 30 were made to undergo coronary CT angiography (cCTA). Apparently cCTA provides detailed pictures along with information on plaque buildup and narrowing in the vessels. While 26 men and 23 women were encompassed in the OSA group, 22 men as well as 24 women comprised the matched control group.

U. Joseph Schoepf, M.D., professor of radiology and medicine and director of cardiovascular imaging at the Medical University of South Carolina in Charleston, S.C. and colleagues observe that the amount of calcified plaque in the coronary arteries did not differ much between the two groups. Yet the overall composition of vessel plaque was possibly different. The OSA group registered higher prevalence of non-calcified and mixed plaque than the non-OSA group. Since non-calcified plaque is more vulnerable to rupturing and causing a blood clot, it can be referred to as bad plaque.

Non-calcified plaque can possibly result in a heart attack or other cardiovascular event. OSA may dramatically elevate prevalence of vessel narrowing and more extensive vessel involvement. 88 percent OSA patients and 59 percent non-OSA patients seemingly had narrowing in at least one vessel. Narrowing in four vessels appeared among one-third of OSA patients. It was suggested that cCTA can be put to use as a screening tool for obese individuals facing a heightened risk for cardiovascular disease.

The study was presented at the annual meeting of the Radiological Society of North America (RSNA).