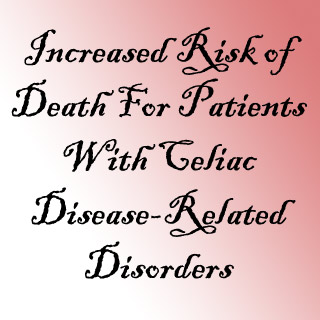 A new study points out that those patients who apparently have lesser degrees of celiac disease-related symptoms, like intestinal inflammation or underlying celiac disease, supposedly have a reasonably bigger possibility of death.

The authors provide background information by mentioning that celiac disease is an immune-mediated disorder that is triggered by gluten exposure in genetically sensitive individuals, occurring in about 1 percent of the Western population. It may harm the digestion of nutrients through the small intestine, with symptoms counting recurrent diarrhea and weight loss.

Even though a lot of studies have demonstrated an increased possibility of death in celiac disease, not much is known about the continuing consequences of unfocused small-intestinal inflammation without villous atrophy which claims to be abnormality of the small intestinal mucosa which may result in flattening of the mucosa.

The authors commented, “Research on other inflammatory disorders suggests that inflammation may be associated with increased mortality, but this has not been investigated for nonspecific inflammation in the small intestine.”

To check the by and large possibility of death in people with celiac disease and inflammation, data from nationwide histopathology were apparently gathered from biopsies taken between July 1969 and February 2008 in Sweden. It was taken by Jonas F. Ludvigsson, M.D., Ph.D., of Örebro University Hospital, Örebro, Sweden, and colleagues.

This data from the biopsies was supposedly separated into three groups. The first group consisted of marsh stage 3 which is claimed to be a categorization of the stage of the celiac disease. The second group comprised of villous atrophy; which may be around 29,096 individuals and inflammation i.e. marsh stage 1-2 in around 13,306 people and the third group included 3,719 people with latent celiac disease.

Latent celiac disease was apparently described as positive celiac disease serology in people with usual intestinal mucosa. Through connection with the Swedish Total Population Register, the experts apparently predicted the possibility of death through August 2008, as supposedly contrasted with age- and sex-matched controls from the common population.

The danger of death was apparently the maximum in the first year of follow-up, with celiac disease linked to a supposed 2.8-fold increased risk of death. Inflammation was apparently seen with an approximate 4.7-fold increase. Latent celiac disease was supposedly seen with around 1.8-fold increase. After the first year of follow-up, these figures appeared to reduce. The possibility of death also seemed to diminish with age at diagnosis, with threat being apparently greater for those diagnosed before age 20.