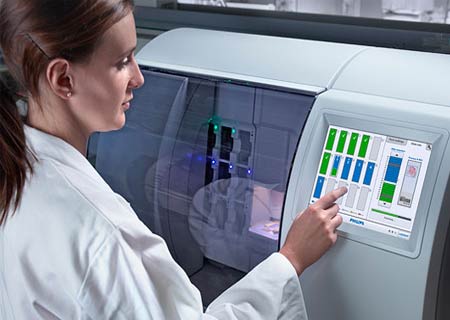 At the College of American Pathologists 2009 annual meeting, Royal Philips Electronics will declare that it is creating integrated digital solutions for the medical pathology sphere. Philips has designed a classy digital pathology solutions to alleviate the workload and sustain decision making in central and hospital-based pathology departments.

One way that pathologists apparently identify and distinguish disease is by analyzing tissue samples detached from patients. The immense bulk of cancer diagnoses are said to be established or verified by a pathologist. By digitizing the images that pathologists usually examine through a microscope, Philips’ objective is to apparently transport the digital switchover gains.

The means to a successful execution of digital pathology solutions are systems that are designed around the requirements of the user, that are simple to use, and that impeccably match into present workflows. Philips is dealing with these vital necessities by operating directly with top pathologists in the USA and Europe. The Philips system apparently includes a high-throughput pathology slide scanner and high-capacity image storage and viewing system, and advanced software for feature recognition and analysis.

Bob van Gemen, General Manager of Philips Digital Pathology, commented, “With a much higher proportion of people living to old age, there will be many more sick people in the world. Coupled with a world-wide shortage of skilled pathologists and the trend towards more pathology tests per patient, there is a real need to improve the efficiency of pathology departments by speeding up procedures and helping pathologists in their decision making and reporting.”

Philips is already operating with top pathology departments to assess the advantages of the system in clinical environments. However, it still welcomes new partners to expand the system more, mainly in places like the development of industry standards for image capture and compression. It is also keenly looking for partnerships with companies that focus in histological stains and staining techniques in order to extend further image analysis and interpretation software suites.