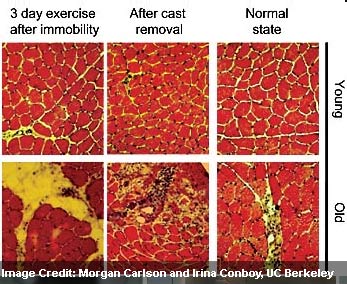 A study conducted at the University of California, Berkeley, has claimed that it has recognized important biochemical pathways which are apparently connected to the aging of human muscle.

By influencing these pathways, the experts were apparently able to turn back the clock on old human muscle, by supposedly reinstating its capability to mend and reconstruct itself.

“Our study shows that the ability of old human muscle to be maintained and repaired by muscle stem cells can be restored to youthful vigor given the right mix of biochemical signals. This provides promising new targets for forestalling the debilitating muscle atrophy that accompanies aging, and perhaps other tissue degenerative disorders as well” commented, Professor Irina Conboy, a faculty member in the graduate bioengineering program that is run jointly by UC Berkeley and UC San Francisco, and head of the team conducting the study.

Some of the earlier studies in animal models headed by Conboy alleged that the capability of adult stem cells to mend and substitute damaged tissue is said to be overseen by the molecular signals they receive from neighboring muscle tissue, and that those signals could transform with age in ways that may prevent effective tissue repair. Those studies have also illustrated that the regenerative function in old stem cells could be recharged, given the suitable biochemical signals. It was not very apparent if similar rules were functional for humans. Conboy observed that unlike animals, laboratory animals supposedly have identical genes and are apparently brought up in similar environments. In addition, the usual human lifespan may last for seven to eight decades, while lab mice apparently reach the end of their life by age 2.

The UC Berkeley experts, in partnership with Dr. Michael Kjaer and his team examined samples of muscle tissue from almost 30 healthy men who took part in an exercise physiology study. The mean age of young participants was 22.6 years and the ages ranged from 21 to 24, whereas the mean age of the old subjects was 71.3 years and it ranged from 68 to 74 years.

At the beginning of the study, muscle biopsies were taken from the quadriceps of all the participants. The leg from which the muscle was taken was in cast for about 2 weeks to apparently reproduce muscle atrophy. The participants apparently exercised with weights to regain muscle mass in their free legs after the cast was removed. Extra samples of muscle tissue for every participant was taken at three days and again at four weeks after cast removal, and then it was sent to UC Berkeley for examination.

It was seen that before the legs were immobilized, the adult stem cells in charge of muscle repair and regeneration were only partially as many in the old muscle as they were in young tissue. This difference augmented even more in the exercise stage, with younger tissue apparently having four times more regenerative cells that were actively mending worn as opposed to old muscle, in which muscle stem cells supposedly stayed inactive. It was also seen that old muscle apparently displayed signs of inflammatory response and scar formation during immobility and again four weeks after the cast was detached.

The response of the human muscle to biochemical signals was analyzed. From preceding studies it was found that adult muscle stem cells have a receptor known as Notch, which apparently stimulates growth when activated. Those stem cells also have a receptor for the protein TGF-beta that, when excessively activated, apparently leaves a chain reaction that could eventually hamper a cell’s capability to split.

It was mentioned that aging in mice is apparently linked to part with the progressive decline of Notch and increased levels of TGF-beta, eventually jamming the capacity of the stem cells to successfully reconstruct the body.

It was seen that mitogen-activated protein (MAP) kinase was apparently a significant positive regulator of Notch activity which may be necessary for human muscle repair, and that it could be inactive in old tissue. MAP kinase (MAPK) is a vital enzyme for organ formation in varied species like nematodes, fruit flies and mice. For old human muscle, MAPK levels are believed to be low, so the Notch pathway is apparently not activated and the stem cells no longer carry out their muscle regeneration tasks properly.

The findings were published in the journal EMBO Molecular Medicine, a peer-reviewed, scientific publication of the European Molecular Biology Organization.