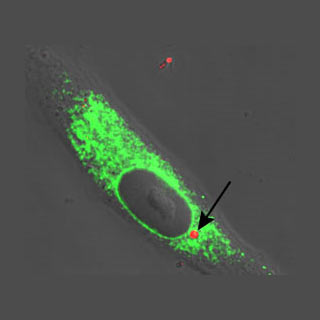 A new technology has been developed that may bring a cheer to everybody. Researchers from Queen Mary, University of London claimed to have developed micrometer – sized capsules to carefully carry drugs inside living cells.

In the future, this method could permit full courses of prescription drugs to be efficiently ‘shrink-wrapped’ and covered under the skin or within the body. These ‘micro shuttles’ could be loaded with a particular dose of medication and may be opened slightly, thereby discharging their contents.

By this new method, drugs like insulin could be entrenched within the body for use when they may be required. Their release could then be driven by a biological trigger like a fall in blood sugar levels, or may also be generated physically with a pulse of light.

PhD student Matthieu Bédard and Prof Gleb Sukhorukov of Queen Mary’s School of Engineering and Materials Science have apparently established this novel procedure to work in living tissue by carrying fluorescent test-molecules in light-activated capsules. The research is in collaboration with Dr Sebastian Springer at Jacobs University in Bremen and colleagues from the Max Plank Institute of Colloids.

Matthieu Bedard commented, “The main advantage of using such microcapsules is that they can be designed to be very stable inside the body, protecting their contents. This is particularly important for the many medications that are rapidly degraded or altered by the body. These capsules can be used to ‘store’ drugs in the body for later use.”

The capsule apparently has a diameter of two micrometers. It is built by covering strands of a metabolism-resistant material around spherical particles, which are then apparently dissolved in acid. An empty container is left behind. To fill the capsules, the researcher heats them in a solution that apparently has the preferred drug compound. This could make them shrink and supposedly ambushes some of the solution and compound inside.

The loaded capsules are then introduced into live cells by a system known as electroporation which is a small electric shock. It apparently makes the cell walls absorbent for micrometer-sized particles. The cells are supposedly undamaged by this treatment and maintain the capsules.

In this experiment, the capsules were exposed to an infra-red laser beam that may not influence the cell but is picked up by nano-gold particles in the capsule walls, thereby altering their structure and discharging the micro shuttle contents.

Prof Gleb Sukhorukov mentioned, “This new technique could have many biological applications, including delivering DNA into cells for gene therapy. The capsules could also be filled in with magnetic particles that collect and extract miniscule samples from inside cells. Other applications could see patients needing internal medication after surgery being administered drugs without the need for further invasive procedures or hospital visits.”

However, there are still questions about how to direct the capsules to the right cells. Also finding a way to make capsules that are safe for human needs to be addressed. It is possible that one will see useful applications for this technology being tested in the next five years.

The findings were published in the October issue of Small.

Inactive Lifestyle could speed up Aging