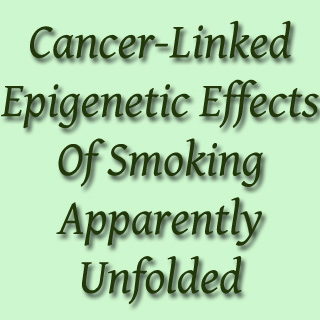 Scientists across the globe have pointed out various adverse effects of smoking. Known to boost depressive symptoms, this addiction is harmful for head and neck cancer patients. UK scientists have apparently discovered a direct relationship between taking up smoking and epigenetic changes linked with the development of cancer. It was claimed that smoking is the single biggest cause of cancer in the world and carcinogenic substances in tobacco smoke deteriorate DNA.

During the study, investigators focused on ascertaining the probable association between smoking and methylation. A cohort of 2,011 healthy young women aged 15-19 years was undertaken. All the participants were initially enrolled in a study of pre-cancerous changes to cells of the cervix. Investigators included only those volunteers who had normal smears and who also tested negative for human papillomavirus. In the subgroup of disease-free women, scientists tested the cervical smears of participants who first started to smoke following study entry for p16 methylation. The acquired results were then compared to women who were never smoked.

Dr. Yuk Ting Ma from the Cancer Research UK Institute of Cancer Studies, Birmingham, said, “Until now, however, there has been no direct evidence that smoking induces DNA methylation in humans. Cross-sectional surveys restricted to patients with cancer have revealed that aberrant methylation of several tumor suppressor genes is associated with smoking. But such surveys cannot distinguish those epigenetic changes that are a consequence of the disease process from those which are directly attributable to smoking.”

This particular group of women was selected to make sure that there were no potential confounding factors for the detection of p16 methylation, in otherwise healthy young women. Investigators aimed to analyze p16, a tumor suppressor gene. When the gene is methylated, normal tumor-suppressing function may be inactivated. DNA methylation is known to be a form of epigenetic change resulting in inactivation of tumor suppressor genes. Methylation of p16 is seemingly correlated with the development of cancer in several parts of the body.

Dr Ma highlighted, “Our study showed that compared with never-smokers, women who first started to smoke during follow-up had an increased risk of acquiring methylation of p16. Our choice of study design and our study population allowed us to reveal, for the first time, the relationship between starting to smoke and the subsequent appearance of an epigenetic change.”

All the participants were previously subjected to a study of cervical neoplasia, so experts utilized cells from cervical smears to test for methylation of p16. It was noted that women who took up smoking were more than three times as likely to receive p16 methylation, with the odds ratio of 3.67. The study concludes that smoking may not induce DNA methylation. Additional investigations will be undertaken for demonstrating the way women acquiring smoking-induced methylation have an elevated risk of developing malignancy.

The study was presented at the 35th Congress of the European Society for Medical Oncology (ESMO) in Milan, Italy.

Liking for salt is developed during early infancy, says study