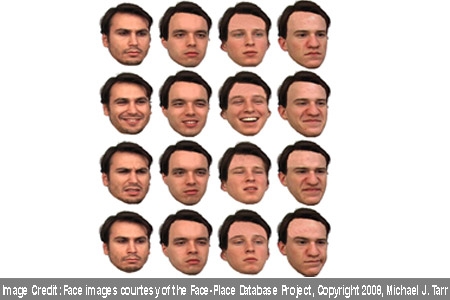 Every time an individual sees a known person, the brain may rapidly and effortlessly recognize that person by his or her face. Over the years, it has been assumed that certain brain areas seemingly mediate facial recognition. Well, a new study from the Carnegie Mellon University suggests that an entire network of cortical areas work together to identify faces.

At the time of the study, participants were shown images of faces while in a MRI scanner. They had to recognize different facial identities with varying facial expressions. With the assistance of dynamic multivariate mapping, scientists were able to analyze the fMRI data and found a network of fusiform. They also noted anterior temporal regions that respond with distinct patterns to different identities. Apart from that, it was observed that the information is supposedly distributed in an even manner among the anterior regions.

“This research will change the types of questions asked going forward because we are not just looking at one area of the brain. Now, scientists will have to account for the system as a whole or else our ability to understand face individuation will be limited,” quoted Adrian Nestor, a postdoctoral research fellow within CMU’s Department of Psychology and lead author of the study.

The right fusiform region is believed to be significantly involved in the network. The research discovery can possibly help in developing targeted remedies for disorders like face blindness. Scientists not only laid hands on a more clearly defined architectural model of the brain, but were able to determine the involvement of multiple brain areas in face recognition as well as in other types of processes, like visual word recognition.

The study is published in the current issue of PNAS.