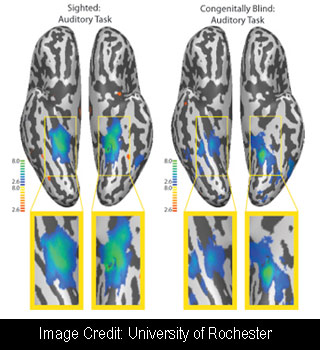 If you have ever wondered how blind people identify objects as living or non-living then here’s an interesting piece of news. Data collected at the Center for Mind/Brain sciences at the University of Trento in Italy reveals that the visual centers of brains of blind people separate living objects and non-living objects the same way as sighted people. These findings were put forth by researchers at the University of Rochester.

For reasons unknown, the processing of living and non-living objects seems to have taken place in different sections of the brain. This had always been assumed by scientists however this new research shows that that the concept of sorting out living and non-living objects separately by the brain is present even in people who are blind since birth.

The findings appear to imply that the brain categorizes objects in a way which is specific to the character of the object. It differentiates objects such as if an object can be eaten or if it is a landmark on the way home or if it is an enemy they have to be away from. They are not separated entirely by the way they look.

Bradford Mahon, postdoctoral fellow in the Department of Brain and Cognitive Sciences at the University of Rochester and lead author of the analysis mentions “If both sighted people and people with blindness process the same ideas in the same parts of the brain, then it follows that visual experience is not necessary in order for those aspects of brain organization to develop We think this means significant parts of the brain are innately structured around a few domains of knowledge that were critical in humans’ evolutionary history.”

According to previous studies Mahon mentions that different objects such as table or a mountain stimulate areas of the brain as well as stimulate the picture of living objects like a human face or an animal. But why it would process the two different categories differently is still unknown. Since the areas in the brain appear to get stimulated when the objects were seen, scientists were of the opinion that how the object looked determined the way the brain seems to have processed them. The researcher explains that since living things have curved forms the brain processes them in a way which is reserved for curved forms.

To validate the finding that appearance indeed plays an important role in how the brain processes its functions Mahon and his team, led by Alfonso Caramazza, director of the Cognitive Neuropsychology Laboratory at Harvard University, conducted a research and asked people who were blind since birth to think about a few animate or non-animate items. Even though these people had no visual understanding at all, their brains used some method to determine where to do the categorization other than the way the object looked.

Mahon stated “When we looked at the MRI scans, it was pretty clear that blind people and sighted people were dividing up living and non-living processing in the same way, we think these findings strongly encourage the view that the human brain’s organization innately anticipates the different types of computations that must be carried out for different types of objects.”

Experts are of the opinion that facial expressions would need a particular kind of processing which was connected to understanding emotions but a landmark will have to be processed with a sense of knowledge of the surroundings. These things are processed differently in the brain as one is dealing with emotions and the other with knowledge.

Mahon is now carrying out new experiments which are planned to offer more insights on the distinction between different objects which are classified separately in our brain. The new findings should provide more information about the same both in the blind as well as sighted individuals and also stroke patients.

The research was published in the issue of Neuron.