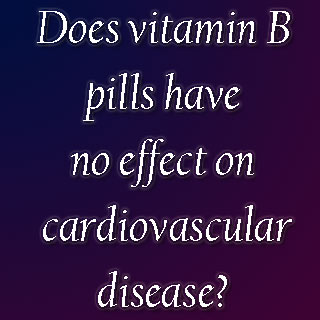 A new study makes a shocking revelation mainly that vitamin B supplements should not be suggested for prevention of heart disease. This study seems to have shown that these supplements fail to decrease the possibility of developing or dying from cardiovascular disease.

Certain B-vitamins, particularly B12, B9 i.e. folic acid and B6, are believed to influence levels of an amino acid in the blood called homocysteine. Apparently, high levels of this molecule are associated with an increased risk of heart disease.

It has been suggested that providing B-vitamin supplements could possibly assist in regulating levels of homocysteine. This in turn seems to decrease the risk of cardiovascular disease and death. However, according to the study experts there appears to be no scientific basis for this claim.

“There is no evidence to support the use of B-vitamins as supplements for reducing the risk of heart attack, stroke or death associated with cardiovascular disease. And it is important to point out that although we may have not found a positive effect, these kinds of studies are vitally important for determining the factors that influence the risk of developing and dying from this disease, which is the number one cause of death in the world today,” says lead author of the study, Arturo Marti-Carvajal of the Iberoamerican Cochrane Network in Valencia, Venezuela.

For the purpose of the study, experts carried out nearly eight trials involving a total of 24,210 people. They found that none of the eight trials independently supported the idea that giving B-vitamin supplements may perhaps prevent heart disease.

“Prescription of these supplements cannot be justified, unless new evidence from large high quality trials alters our conclusions. There are currently three ongoing trials that will help to consolidate or challenge these findings,” elucidates Marti-Carvajal.

Simultaneously, the data showed that vitamin B supplements whether compared with placebos or standard care seem to have no effect on the frequency of heart attack, stroke or death associated with heart disease.

The findings of the study have been published in the journal, The Cochrane Library.