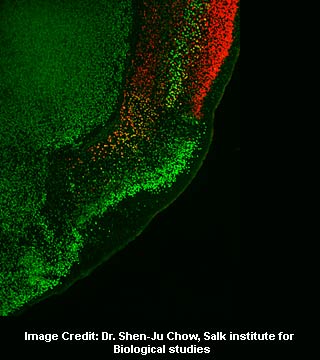 The cerebral cortex is a structure in the brain that plays a major function in memory, attention, perceptual awareness, thought, language, and consciousness.

Study experts from Salk Institute for Biological Studies claim that they have recognized the first genetic mechanism that decides the local identity of progenitors tasked with producing the cerebral cortex. Their finding exposes a vital period during which a LIM homeodomain transcription factor called as Lhx2 which decides over the progenitors’ local fate.

This knowledge will also probably assist in perceiving the genetic underpinnings of several neurodegenerative disorders, and supply the means to exclusively indicate stem cells to fix particular portions of the brain destroyed by disease or injury.

Dennis O’Leary, Ph.D., a professor in the Molecular Neurobiology Laboratory, who led the study, commented, “These findings provide a foundation for understanding the important process of developing the distinct regions of the cerebral cortex and determining their unique properties.”

During embryonic brain development, the stem cells that may offer rise to the cerebral cortex apparently pass through a chain of strongly synchronized stages: from omnipotent stem cells to cortical progenitor cells that could finally form functionally specific areas, like the six-layered neocortex, the largest and evolutionarily latest portion of the cerebral cortex, and the older three-layered olfactory cortex among others.

In a study published earlier this year, O’Leary and Setsuko Sahara, Ph.D., a senior research associate in the O’Leary lab, exposed that the growth aspect Fgf10 regulates the timing of the significant transition duration that could connect the untimely growth stage of neuroepithelial cells and the later neurogenic phase of radial glia. Now, the Salk experts set out to know when and how these cells acquire their upcoming local identity.

The principal model for finding out genetic mechanisms that identify the generation of different kinds of neurons has apparently been the spinal cord.

O’leary remarked, “In the spinal cord distinct subpopulations of progenitors that generate different classes of neurons are defined by unique sets of transcriptions factors, and are separated by sharp spatial borders. But in the cerebral cortex the situation is very different. There are no genes that we or anybody else have identified that define separate subpopulations of progenitors that generate neurons that form the different regions of the cerebral cortex. Thus a different mechanism must operate.”

The most capable applicant was believed to be Lhx2, which is expressed in all progenitors of the Emx1 lineage but at diverse levels in a graded pattern. Examining this hypothesis needed that Shen-ju Chou, Ph.D., a senior research associate in the O’Leary lab and first-author of this study, developed a new genetically-engineered mouse to erase Lhx2 in a conditional fashion.

Shen-ju and two other members of O’Leary’s team, Carlos G. Perez Garcia, Ph.D. and Todd T. Kroll, Ph.D., then used this mouse line to remove Lhx2 at diverse times during embryonic development to evaluate whether Lhx2 had any say over the progenitors’ fate in generating areas of the cerebral cortex.

When the researchers removed Lhx2 from neuroepithelial cells before they made the shift into radial glia, the neocortex was apparently altered into a huge, out-of-place olfactory cortex. But when they erased Lhx2 just one day afterward the change did not take place, thereby signifying that the progenitors’ local identity was fixed.

Chou mentioned, “These experiments show that Lhx2 regulates the regional fate decision of progenitors of the Emx1 lineage to generate neocortex or olfactory cortex. Lhx2 needs to be present in appropriate quantities during a critical window of time for progenitors to make the appropriate fate decision.”

O’Leary’s team devices to expand this work to decide the mechanism of action of Lhx2, and whether altering Lhx2 levels could direct, or limit, the separation of embryonic stem (ES) cells, stimulated pluripotent stem (iPS) cells. This work could be significant for developing plans for brain repair.

This study was published in the advance online edition of Nature Neuroscience.

Second round of Gefitinib could add to potential lung cancer therapy