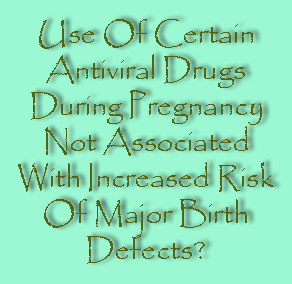 It is usually believed that antiviral medications consumed by expecting mothers elevate the risk of major birth defects. A recent study suggests that intake of certain antiviral drugs like acyclovir, valacyclovir, and famciclovir are not associated to the risk of such defects. The medications are probably prescribed to patients with herpes simplex and herpes zoster infections.

Herpes simplex is presumed to be a common infection reported by 1 percent women during the first trimester of pregnancy. The authors initiated a registry-based study to highlight the probable link between acyclovir, valacyclovir, and famciclovir use in the first trimester of pregnancy and major birth defects. The study included 837,795 live-born infants in Denmark from January 1996 to September 2008. It was mentioned that the volunteers had no diagnoses of chromosomal aberrations, genetic syndromes, and birth defect syndromes with known causes, or congenital viral infections.

Scientists add, “Although the safety of acyclovir, valacyclovir, and famciclovir in general has been well established, data on the use of these antivirals in early pregnancy are limited.”

Bjorn Pasternak, M.D., Ph.D., and Anders Hviid, M.Sc., Dr.Med.Sci., of Statens Serum Institut, Copenhagen, Denmark, used nationwide registries for evaluating individual-level information on dispensed antiviral drugs, birth defect diagnoses and potential confounders which are the possibly factors influencing the outcomes. A total of 1,804 pregnancies were exposed to acyclovir, valacyclovir, or famciclovir at any time in the first trimester. The result was that 40 infants forming 2.2 percent reported a major birth defect as compared to 19,920 of 835,991 infants representing 2.4 percent among the unexposed pregnancies.

Experts quote. “Our study, to our knowledge the largest of its kind, found no significant association between first-trimester exposure to antiherpetic antiviral drugs and major birth defects. Consequently, it has immediate clinical implications and may support informed decisions on safety when prescribing antivirals for herpes infections in early pregnancy. Acyclovir is the most extensively documented antiviral and should therefore be the drug of choice in early pregnancy, while data on valacyclovir and famciclovir are still insufficient. Future research on antiherpetic antivirals and mother-child health should include safety studies with regard to spontaneous abortion and preterm birth, and during breastfeeding.”

The authors adjusted several variables and observed that acyclovir, valacyclovir or famciclovir exposure at any time in the first trimester is not related to elevated risk of major birth defects. It was concluded that first-trimester use of acyclovir, probably the most commonly prescribed antiviral, was not linked with major birth defects. While 32 cases forming 2.0 percent were among 1,561 exposed, 2.4 percent appeared in the unexposed.

Scientists observed that valacyclovir forming 7 of 229 infants representing 3.1 percent and famciclovir presenting 1 of 26 infants with 3.8 percent were associated with major birth defects, although use of famciclovir was uncommon. Having commenced further investigations, the experts were apparently unable to highlight links between antiviral drug exposure and 13 different subgroups of birth defects. It was mentioned that the number of exposed cases in each subgroup was small.

The study was published in the August 25 issue of JAMA.