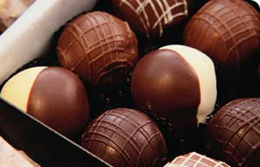 Chocoholics have been given further reason to rejoice when a small clinical study showed that dark chocolate improves the function of blood vessels. While the researchers cautioned against bingeing on chocolates, they said the findings of the trial were clear and called for larger such studies to confirm the results.

“In this sample of healthy adults, dark chocolate ingestion over a short period of time was shown to significantly improve (blood vessel) function,” said Dr. Valentine Yanchou Njike of Yale Prevention Research Center, a co-investigator of the study.

The results, presented at the annual American College of Cardiology scientific meeting in New Orleans, add to mounting evidence of the health benefits of dark chocolate.

During the six-week trial, 45 people were given 227 grams of cocoa without sugar, cocoa with sugar or a placebo each day.
An upper arm artery’s ability to relax and expand to accommodate increased blood flow – known as flow mediated dilation (FMD) – was measured using high-frequency ultrasound before and after daily cocoa or placebo consumption.

“While the findings from this study do not suggest that people should start eating more chocolate as part of their daily routine, it does suggest that we pay more attention to how dark chocolate and other flavonoid-rich foods might offer cardiovascular benefits,” Njike said.