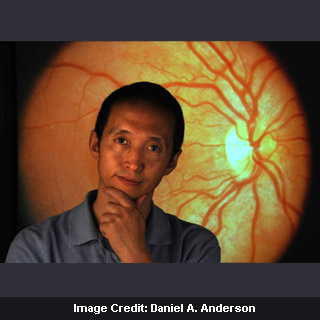 A latest study from University of California, Irvine has shown that eyes could prove to be a possible gateway in identifying whether or not a person has Alzheimer’s disease.

Scientists have found that retinas in mice genetically altered to have Alzheimer’s seem to go through changes comparable to those that occur inside the brain. Supposedly these changes were particularly the accumulation of amyloid plaque lesions.

Moreover, scientists discovered that when Alzheimer’s therapies are tested in such mice, retinal changes that occur could possibly foresee how the treatments will work in humans better as compared to changes in mouse brain tissue.

These novel findings appear to be crucial in developing retinal imaging technology that may assist in diagnosing and treating people with Alzheimer’s. It was estimated that Alzheimer’s afflicts nearly 5.3 million people in the U.S. Also, it is believed to be the leading cause of elderly dementia.

Brain imaging techniques are being tested, but retinal imaging may be less invasive, less expensive and simpler to perform.

“It’s important to discover the pathological changes before an Alzheimer’s patient dies. Brain tissue isn’t transparent, but retinas are. I hope in the future we’ll be able to diagnose the disease and track its progress by looking into the eyes,” says a UCI lead neuroscientist, Zhiqun Tan.

Tan along with his colleagues were believed to have examined the retinas of Alzheimer’s mice that had been treated with immunotherapy. The findings of the study revealed that vaccinated mice seem to have performed better on learning and memory tests in contrast to untreated mice.

When immunotherapy was believed to have been tested in humans, inflammation of brain tissue appears to have occurred similar to that observed in the mice retinas.

“This tells us the retina may be more sensitive at reflecting changes in the human brain,” says Tan.

UCI researchers, including Dr. Steven Schreiber, neurology professor and interim chair, are noted to be working on retinal imaging technology for Alzheimer’s patients. Schreiber claimed that novel methods to view various body parts with high resolution are being invented at a quick speed. They anticipate that the imaging field will continue improving as they progress in developing retinal technique.

The findings of the study will be published in The American Journal of Pathology.

Depression and diabetes may be closely related to each other

Has infertility increased over the years?