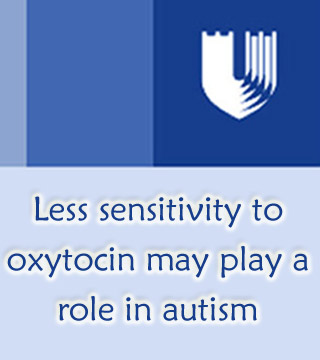 Researchers at Duke University Medical Center have discovered a novel genetic signature that seems to correlate strongly with autism. Also, it doesn’t involve changes to DNA sequence itself, but somewhat to the way the genes appear to be turned off and on. Apparently, this latest finding may suggest new approaches in diagnosing and treating autism.

The researchers were believed to have found higher-than-usual numbers of gene-regulating molecules called methyl groups in a region of the genome. These methyl groups may perhaps regulate oxytocin receptor expression in people suffering from autism.

“In both blood samples and brain tissue, the methylation status of specific nucleotides in the oxytocin receptor gene is significantly higher in someone with autism, about 70 percent, compared to the control population, where it is about 40 percent,” says co-lead researcher Simon G. Gregory, PhD, assistant professor in the Duke Department of Medicine.

Oxytocin is known to be a hormone secreted into the bloodstream from the brain. Additionally, it seems to be released within the brain where it has a bearing on social interaction.

Earlier researchers have shown that providing oxytocin could improve an autistic person’s social engagement behavior. Currently, it is being explored as a probable treatment of the disorder. Higher methylation of the oxytocin receptor gene may possibly make a person less responsive to the hormone.

Even though the methylation status of the OXTR gene is not an ultimate diagnosis of autism by itself, a test for methylation could be used together with other clinical tests for diagnosing autism. Gregory was of the opinion that methylation-modifying drugs also may be a latest possibility for treatments.

However not a change to the DNA sequence itself, methylation status may perhaps be innate, by epigenetics. Supposedly, epigenetics are the inherited changes in gene regulation.

Co-lead researcher Jessica J. Connelly, PhD, assistant professor in the Department of Medicine at the University of Virginia stated that, “The epigenetic link to autism is extremely exciting as it provides another opportunity for us to explore the heritability of this disorder and argues the importance of exploring epigenetic markers in complex disease.”

The identification of differences in methylation status of OXTR in people with and without autism was believed to have been discovered via a genome-wide investigation of genomic instability.

The researchers were noted to have analyzed approximately 119 individuals with autism in order to recognize genomic rearrangements. They found that one of these individuals seem to have a DNA deletion of a region containing the OXTR gene.

Subsequently, the group examined the genomic make-up of the individual’s family members. They established that the boy with the deletion appear to have a brother with autism who didn’t have the deletion. It was noted that their mother had symptoms of an obsessive-compulsive disorder, but not autism. Autism and OCD are known to share the symptom of extremely repetitive thoughts and behaviors.

They examined the brother’s genome and found occurrences of high methylation. With this discovery, they looked again at independent collections of blood samples and brain tissue from a repository of specimens. The researchers found consistent differences in OXTR methylation.

“We are excited about our findings because they represent one of the few occasions in which a mechanism other than genetic susceptibility or genome instability is implicated in the development of autism,” elucidates Gregory.

“These results provide a possible explanation of why social isolation forms part of the autism spectrum — because an autistic individual’s ability to respond to oxytocin may be limited. Oxytocin has been tied to levels of trust and ability to read social cues,” continues Gregory.

The researchers anticipate that their investigation may possibly provide information about which individuals will respond better to treatment with oxytocin.

The research findings have been published in online journal, BMC Medicine.