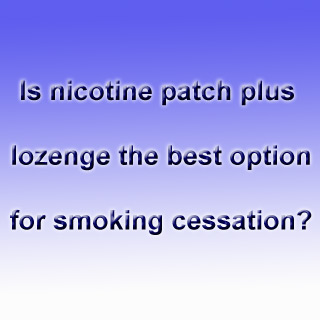 People who want to quit smoking ought to pay attention to this bit of news. A new study alleges that in a comparison of five dissimilar smoking cessation medications, a nicotine patch and a nicotine lozenge seems most effectual in assisting smokers quit.

Providing background information, the authors state that many smokers have successfully quit using a variety of smoking cessation pharmacotherapies, yet there is little direct evidence on the relative efficacies of these different pharmacotherapies.

The authors mentioned, “Without such evidence clinicians and smokers lack a strong empirical basis for recommending or selecting among them.”

A clinical trial of smoking cessation therapies contained 1,504 adults. This trial was performed by Megan E. Piper, Ph.D., and colleagues at the University of Wisconsin School of Medicine and Public Health, Madison. Apparently every participant had smoked at least 10 cigarettes a day during the earlier six months and was encouraged to stop.

Smoking rates were evaluated one week, eight weeks and six months post the quit date. When all the treatments were matched against each other at the six-month point, it was seen that apparently only people in the patch plus nicotine lozenge group were supposedly more effective in quitting as compared to those taking placebo. Smokers using a patch and nicotine lozenge apparently had more chances to have stopped at seven days and were supposedly inclined to have other additional optimistic results like a longer period of time prior to relapsing. Moreover, this combination along with the patch alone were said to be most effectual in aiding people attain at least one day of abstinence from smoking which is certainly a significant stepping stone to successful quitting.

Preceding study apparently pooled the patch with other nicotine replacement therapies like gum, nasal spray or an inhaler.

The authors commented, “The present results suggest that the nicotine lozenge can also be effective as an adjuvant [additional treatment] to the nicotine patch. The key seems to be that an ad libitum, or as needed, agent must be paired with the patch; simply using higher patch doses does not seem to augment outcomes to the same degree.”

The lozenge, though effectual with the patch, apparently did not seem to function any better as compared to placebo when used alone. All of the interventions seemed harmless and well tolerated. Only 4 of 1,504 subjects supposedly pulled out from the study for medication-related reasons.

The authors concluded by mentioning that these findings plus recent meta-analyses published in the 2008 Public Health Service Guideline Update suggest that a combination pharmacotherapy comprising the nicotine patch and an ad libitum nicotine replacement therapy should be routinely considered for use as a smoking cessation treatment. In addition, this study illustrates that after more than 20 years the patch remains a highly efficacious pharmacotherapy for helping people quit smoking.

The study was published in one of the JAMA/Archives Journals.