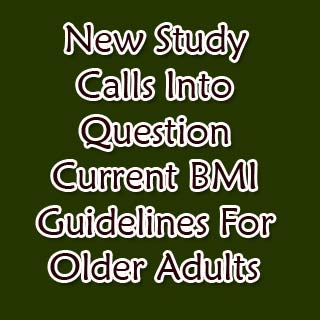 A number of studies in the past seem to have shed light on the fate of overweight individuals. According to a new study overweight adults aged 70 or older seem to be less likely of dying over a 10 year period as compared to those of ‘normal’ weight. The study seemingly calls into question existing BMI guidelines for older adults.

The study reveals that adults who are aged 70 years and over and classified as overweight show fewer chances of dying over a ten year period. This seems to be in comparison to those in the ‘normal’ weight range. The experts’ analyzed data taken over a decade among more than 9,200 Australian men and women aged between 70 and 75. As part of a study into healthy aging, these individuals were assessed for their health and lifestyle at the beginning of study.

The study seems to highlight the condition in Australia which is considered to be the third most obese country following the U.S and UK. Most commonly obesity and overweight are defined by the BMI with the WHO recognizing four main categories namely underweight, normal weight, overweight, and obese. Primarily thresholds for these categories were believed to be on the basis of evidence from studies of morbidity and mortality risk in younger and middle-aged adults. However it doesn’t seem to clearly reveal if overweight and obese cut-points are overly restrictive measures in foreseeing mortality in older people.

Recruiting nearly 4,677 men and 4,563 women, this novel study commenced in 1996. For ten years or until their death depending on which came sooner, the participants were followed. They were also examined for factors like lifestyle, demographics, and health. As per the analysis, scientists found that the mortality risk was lowest for participants who had a BMI classified as overweight. The risk of death seemed to have been reduced by 13% as against normal weight participants. Only the overweight category and not in those people who are obese seemed to show the benefits.

“Concerns have been raised about encouraging apparently overweight older people to lose weight and as such the objective of our study was to examine the major unresolved question of, ‘what level of BMI is associated with the lowest mortality risk in older people?'” revealed lead researcher Prof. Leon Flicker, of the University of Western Australia. “These results add evidence to the claims that the WHO BMI thresholds for overweight and obese are overly restrictive for older people. It may be timely to review the BMI classification for older adults.”

For those individuals who seem to have died before the conclusion of the study, experts suggested that the type of disease that led to death did not appear to affect the protection level being overweight had. In order to eliminate any risk of bias in volunteers with illnesses that caused them to shed weight and also seemed to augment their risk of dying, the scientists contrasted subjects who appeared to be relatively healthy. This was in comparison to those who had major chronic diseases or smoked and no apparent differences in the BMI namely mortality relationship was observed.

“Our study suggests that those people who survive to age 70 in reasonable health have a different set of risks and benefits associated with the amount of body fat to younger people, and these should be reflected in BMI guidelines,” concluded Flicker.

Nearly the same benefit in being overweight seemed to be true for both men and women. However, staying sedentary appeared to double the risk of death for women while it only increased the risk by a quarter in men.

This new study is published today in the Journal of The American Geriatrics Society.