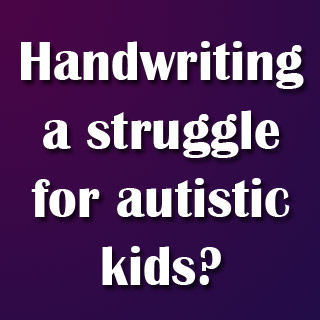 A novel study has discovered that children with autism could perhaps have lower quality handwriting and trouble forming letters in contrast to children without autism.

For the purpose of the study, the authors examined 28 children between the ages of eight and 13. Nearly half of the children were noted to have autism spectrum disorder whereas the other half had no developmental, psychiatric or brain disorders. The authors found that all of the children appear to have scored within the standard range for perceptual reasoning on an IQ test.

Moreover, the children were believed to have been provided with the Minnesota Handwriting Assessment Test. Supposedly, this test makes use of a twisted sentence in order to remove any speed advantage for more fluent readers. For instance, the sentence used on the test seems to have been ‘the brown jumped lazy fox quick dogs over.’

Subsequently, the participants were asked to copy the words in the sentence in turn creating letters of the same size and shape as the sample by means of their best handwriting. The handwriting was believed to have been scored based on five categories namely legibility, form, alignment, size and spacing. Furthermore, the children’s motor skills, including balance and timed movements appear to have been examined and given a score.

Study author Amy Bastian, PhD, of the Kennedy Krieger Institute and Johns Hopkins School of Medicine in Baltimore, MD said that, “Our results suggest that therapies targeting motor skills may help improve handwriting in children with autism, which is important for success in school and building self-esteem. Such therapies could include training of letter formation and general training of fine motor control to help improve the quality of their writing.”

The findings of the study revealed that approximately half of the children with autism seem to have earned less than 80 percent of the total possible points on the handwriting assessment as compared to only one child in the group without autism. Additionally, nine of the fourteen children with autism were believed to have scored below 80 percent on the form category of the handwriting assessment in contrast to simply two of the 14 children without autism.

The findings also showed that the overall quality of handwriting appears to have been worse in children with autism spectrum disorders. However, they may still be able to align space and size their letters just as well as children without autism.

The findings of the study will be published in the journal, Neurology.