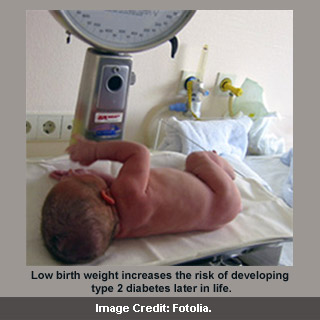 Low birth weight seems to raise the possibility of developing type 2 diabetes later in life. Until recently scientists are believed to have recognized this to maternal malnutrition during pregnancy. However, at present it appears that genetic background may also play a major role.

During this study, the authors were noted to have examined the data of 729 children whose mothers had type 1 diabetes and who thus had a high diabetes risk. Furthermore, they investigated the genetic background of fetuses for modifications in individual DNA bases, named single nucleotide polymorphisms (SNPs).

At this time, they paid attention on nearly three gene regions. Apparently, these gene regions are known to be risk alleles for diabetes caused by diminished insulin secretion. Subsequently, they looked at these in relation to birth weight.

The findings of the study revealed that there seems to be a noteworthy association between the two SNPs of the HHEX-IDE gene region and low birth weight. Supposedly, this was independent of HbA1c levels of the pregnant mother thereby signifying a minor correlation between maternal nutrition and blood glucose regulation. In addition, HbA1c levels refer to lasting blood glucose levels.

“Interestingly, we found this effect in children whose mothers had type 1 diabetes. This could mean that an a priori reduced insulin secretion also plays a role in the development of autoimmune type 1 diabetes,” elucidates first author of the study, Dr. Christiane Winkler of the Forschergruppe Diabetes at Helmholtz Zentrum Munchen.

On the contrary, the authors appear to have found no association between the two SNPs of the other gene regions that were studied i.e. CDKAL1 and SLC30A8 and birth weight. However, this may perhaps not completely reject an association and so such an effect could become noticeable with higher numbers of participants.

Dr. Thomas Illig, PD., head of the Epidemiology, Biological Samples – Genomics research unit at Helmholtz Zentrum Munchen emphasized that, “Indications of genetic associations are usually only found in very large populations. As we see here, it is important to substantiate these in smaller, but very well-phenotyped study populations. We can thus gain information about the possible mechanism of the original results.”

With these findings, the authors seem to have come a step closer in understanding the fundamental genetic mechanisms of diabetes diseases. Subsequently, the authors hope to examine whether the genetic associations observed in this study could also have an effect on body weight later in life. Due to the lasting study, which has run continuously since 1989, this data apparently by now exists.

The findings of the study have been published in the journal of Clinical Endocrinology and Metabolism 2009.