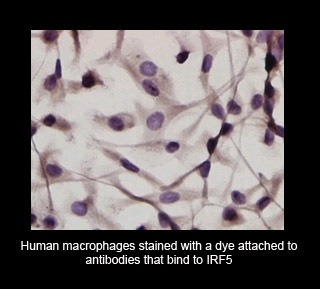 Many conditions like rheumatoid arthritis include high levels of inflammation. Though there are treatments available, the accompanying factors cause much discomfort to patients. Scientists from the Imperial College London claim to have found a protein that functions as a ‘master switch’ in particular white blood cells. They set out to ascertain whether or not these promoted or inhibited inflammation.

Generally with harmful stimuli like tissue damage or infections, the body responds with inflammation as an essential defence mechanism. However in conditions like arthritis, exaggerated inflammation could hurt the body. Specifically patients suffering from rheumatoid arthritis experience a swelling in the joints along with severe pain. However, the factors contributing to all this is not really known.

Macrophages in the immune system are known to either restrain inflammation or stimulate it by the release of certain chemical signals. This could change the behavior pattern of the other cells. Specifically, in this investigation, the scientists checked a protein called IRF5 which they found behaved like a molecular switch. This protein showed the ability to apparently decide whether macrophages promoted or inhibited inflammation.

As per the results, obstructing the release of IRF5 in macrophages could be an able method of treating a host of autoimmune diseases. This could include conditions like inflammatory bowel disease, multiple sclerosis, rheumatoid arthritis and lupus. It could also be beneficial to those whose immune system is not at its best. Earlier researchers from Imperial College London are known to created anti-TNF treatments. Though these are used by many people, approximately 30 percent patients may not really reciprocate well to them and hence the need for wider effective therapies.

Dr Irina Udalova from the Kennedy Institute of Rheumatology at Imperial College London, the senior researcher on the investigation, shared, “Diseases can affect which genes are switched on and off in particular types of cells. Understanding how this switching is regulated is crucial for designing targeted strategies to suppress unwanted cell responses. Our results show that IRF5 is the master switch in a key set of immune cells, which determines the profile of genes that get turned on in those cells. This is really exciting because it means that if we can design molecules that interfere with IRF5 function, it could give us new anti-inflammatory treatments for a wide variety of conditions.”

Variations in the gene encoding IRF5 apparently showed augmented chances of autoimmune diseases. This is also the main reason why Dr Udalova and a PhD student in her lab, Thomas Krausgruber decided to research the role of the protein in inflammation. Engineered viruses were employed as part of the investigation to get in the picture additional copies of the IRF5 gene in human macrophages that were cultured in the laboratory. Causing the cells to generate more IRF5, macrophages with anti-inflammatory properties switched to the role of boosting inflammation.

Upon blocking IRF5 in pro-inflammatory macrophages using synthetic molecules, the cells lowered their production of signals which enhanced inflammation. Genetically altered mice were further observed for their inability to produce IRF5. It was seen that these mice generated lower levels of chemical signals that surged inflammation. The team is now analyzing the mechanism adopted by IRF5 at a molecular level along with the other proteins it interacts with. This will allow them to fabricate ways to curb its effects.

The research is published in the journal Nature Immunology.