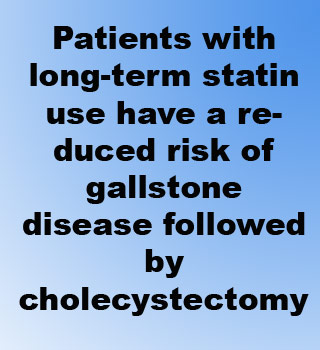 Gallstones can be a painful condition and more often then not patients require a surgery to eliminate the stone from the gall bladder. A latest study by experts from University Hospital, Basel, Switzerland reveals that the use of cholesterol-lowering drugs statins for over a year may be associated with a decreased risk of having gallstones that require surgery.

Gallstones are categorized as either cholesterol ones which are about 80 percent-90 percent or pigment stones that are found in around 10 percent-20 percent people. Also cholesterol stones seem to form on the basis of cholesterol-supersaturated bile.

A large long-term observational study was conducted by Michael Bodmer, M.D., M.Sc., of University Hospital, Basel, Switzerland, along with colleagues to comprehend the apparent link between statin use and the risk of developing gallstone disease followed by cholecystectomy. The study encompassed data from between 1994 and 2008 from the UK-based General Practice Research Database. It involved a total of 27,035 patients with cholecystectomy and 106,531 matched controls were identified, including 2,396 patients and 8,868 controls who reportedly had statin use.

“Statins decrease hepatic [liver] cholesterol biosynthesis and may therefore lower the risk of cholesterol gallstones by reducing the cholesterol concentration in the bile. Data on this association in humans are scarce,” the authors suggest.

“This large observational study provides evidence that patients with long-term statin use have a reduced risk of gallstone disease followed by cholecystectomy compared with patients without statin use. However, the odds ratio was not decreased for patients with short-term statin use but started to decrease after 5 prescriptions, reflecting approximately 1 to 1.5 years of treatment. The risk estimate was consistent across age and sex groups. Adjustment for important risk factors for gallstone disease did not materially alter the results,” the authors elucidate.

Additionally, the authors suggest that a class effect for all statins could be indicated by the observed risk reduction. Also high-dose statin use compared with low-dose exposure could probably mean a tendency toward a lower risk of gallstone disease. Besides, a considerably augmented gallstone risk with cholecystectomy was found for patients with high body mass indexes and for patients with estrogen use.

The experts conclude that their findings could hold clinical relevance given that gallstone disease represents a major burden for health care systems.

The study has been published in the November 11 issue of Jama.