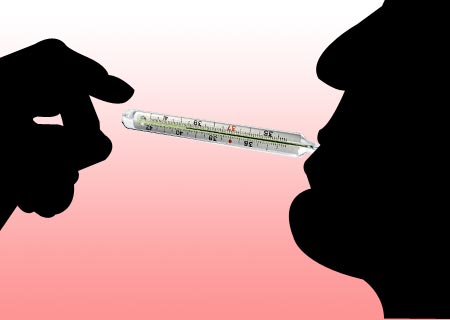 The human body, like your microwave oven or refrigerator, comes with its own temperature control and alarm system. Deep inside the brain, there is a tiny organ called the Hypothalamus which you can compare to the regulator present on the oven’s front panel. This hypothalamus has a fixed temperature called ‘set-point’ (37°C). Our body constantly tries to maintain this temperature by heat-reducing mechanisms such as sweating in hot environments and by heat-producing mechanisms for instance shivering in cold environments.

Similarly, you can take fever to be the body’s alarm system. It is the first signal of invasion by an infection. Body temperature over 37.2°C (99.9°F) is termed as fever. Temperature over 41.5°C (106.7°F) is termed as Hyperpyrexia. Fever is the body’s first reaction to an infection, as the organisms release toxins which attract cells that are part of the body’s defense mechanism. So by warning us of these toxins, our body is asking for help to remove these toxins and organisms out of the body. Thus fever is a defense mechanism and not a disease. We only have to facilitate the body to get rid of the virulent organisms.

Fever is invariably always associated with some other symptoms based on the site of infection. Malaise, weakness, lethargy and loss of appetite are a part and parcel of fever. If the respiratory system is involved, then symptoms like cough, running nose, breathlessness and even chest pain maybe present. If the gastrointestinal system is the victim then painful cramps or colic, loose watery stools, blood in stools, vomiting are the keys to the lock. If the nervous system is the site harboring the infection then headache, vomiting, eye pain will be key pointers. So on and so forth; the body gives various signs to pin-point the exact site.

Various laboratory tests are available to find out the cause for the fever and are done on a routine basis by doctors to help confirm the site of infection. Due to development of brilliant imaging techniques like digital x-rays, CT scan, MRI now hidden bugs are discovered without painful needle pricks.

All said and done, no one visits the family physician unless the fever has persisted for a good 2-3 days at least. Till then, one remains in continuous discomfort. Small steps go a long way and same goes for managing a patient having fever at home. Here are a few simple ways to manage fever at home.

1. Rest – When in fever, the body is spending extra energy to fight the organisms by producing heat, thus the accompanying feeling of weakness and lethargy. One must conserve energy by taking adequate rest and not exerting. Staying put in the bed helps reduce the feeling of being drained out.

2. Diet – As the organisms are feeding on the body’s store of energy it’s very necessary to replenish it adequately. Thus a diet which is high on calories is the need of the day. Beans, pulses, cereals, milk and milk products, eggs, dried fruits are great sources of proteins and should be consumed in plenty. Also, water should be taken in large quantities as it helps the body cool off from within and eliminate the toxins.

3. Personal Hygiene – During a bout of fever, most people are so tired that bathing is not exactly on one’s to-do list. So sponging with lukewarm water is a great alternative to open the pores which are clogged with sweat. Sponging makes one feel not only clean but also fresh and helps reduce the feeling of lethargy to a certain extent. Clean the nose and mouth often with plain water. Make sure all nasal and oral secretions are disposed off immediately and not allowed to stagnate and pool. Avoid oral contact with anyone. Wear light clothing. Avoid woolens, corduroys, silks and stick to loose cotton garments. They help in cooling the body by letting the sweat evaporate and heat radiate.

4. Social Behavior – Until diagnosed, avoid contact with people, especially children and pregnant mothers as they are the most susceptible to any infection. Also, since your immunity is poor during fever, you are likely to get a super added infection from another person in whom it is not causing any symptoms. Cover the nose and mouth while coughing or sneezing.

5. Medication – At home, if the fever still persists then one can take a paracetamol or aspirin to reduce the fever and an ibuprofen for pain. Once diagnosed, then antipyretics which are fever-reducing drugs, antibiotics and antivirals which kill disease causing organisms, analgesics that are pain-killer drugs appear to be the usual line of treatment in allopathy. As far as Homeopathy is considered, based on symptoms various medicines are prescribed, common ones being – Belladonna, Mercurius cor., Silicea, Ferrum Phos., Gelsemium, Arsenic album.

Fever could be taken as a warning to more serious infections or ailments. In case you find your body ringing in that alarm just too often, its time you wake up.