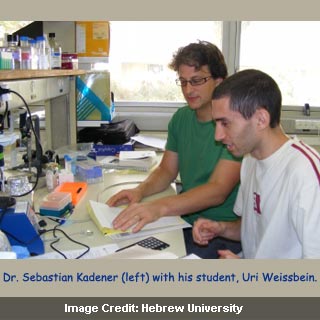 How does our biological system know that it is supposed to function on a 24-hour cycle? Researchers at the Hebrew University of Jerusalem have found that a tiny molecule may perhaps hold the clue to the mystery. Presently, they have discovered that tiny molecules known as miRNAs could be central constituents of the circadian clock.

Humans in addition to most living organisms on earth are known to possess circadian a i.e. 24-hour life rhythm. This rhythm apparently is generated from an internal clock that is located inside the brain and regulates various bodily functions. These bodily functions appear to include the sleep-wake cycle and eating.

The proof for their existence seems to have been apparent and they have been considered for more than 150 years. However, only in recent times the mechanisms that generate these rhythms seem to have begun to be unraveled.

The sleep-wake cycle is known to be the most characterized sign of the circadian clock. In addition, it appears to be generated thanks to specialized neurons seen both in humans and fruitflies. The mechanism governing the circadian clock in fruitflies was noted to be almost identical to the ones humans have.

A researcher of the Alexander Silberman Institute of Life Sciences at the Hebrew University, Dr. Sebastian Kadener, and one of his students, Uri Weissbein were believed to have been amongst a collaborative group of researchers.

These neurons supposedly have the remarkable capability of counting time very precisely via a complex process of gene activation and repression. More so, this could possibly lead to a tightly controlled process that takes exactly 24 hours.

MiRNAs have recently been found and show involvement in different processes in animals. The researchers demonstrated that one specific miRNA called bantam may be able to recognize and regulate the translation of the gene clock. This demonstration supposedly was done through the use of new state-of-the-art techniques i.e. most of them developed in the existing research.

Additionally, this seems to comprise the foremost example of a defined miRNA-gene regulation in the central clock. Perhaps even more significantly, the researchers were among the first to prove that there appears to be a clear role of miRNA regulation in the brain in general and behavior particularly.

The novel findings of the research revealed that a latest mode of regulation may have a crucial importance for the ability of our internal clock to accurately count those 24 hours every day. In particular, they have shown that the very tiny miRNA molecules could perhaps be needed for the circadian rhythms to function.

Moreover, their finding seems to hold extensive implications for potential therapeutic treatment to deal with sleep deprivation and other common disorders connected with the daily life cycle.

The findings of the research have been published in the journal Genes and Development.