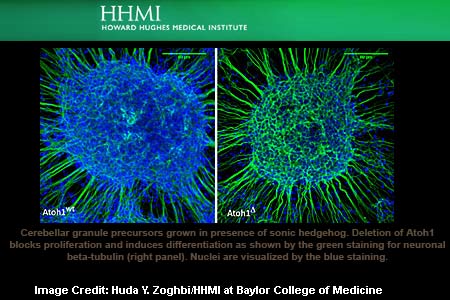 Researchers from Howard Hughes Medical Institute (HHMI) have apparently recognized a gene that could prompt fatal brain cancer. The researchers reveal a new factor that may be essential in the progression of many forms of medulloblastoma.

Medulloblastoma is considered to be the most common type of malignant childhood brain cancer. By battening down the production of the Atoh1 protein in naive brain cells of mice, experts associated with this research appeared to have prevented the development of medulloblastoma.

“If we allow these tumors to develop, and then we take away Atoh1, would that make a difference?” shared Huda Y. Zoghbi HHMI investigator. “When we cloned the gene for Atoh1 in 1996, we had no clue that it had any medical relevance. Now we know that it’s critical for many medical issues, the most recent one being this common childhood cancer.”

With colleagues at Baylor College of Medicine Zoghbi worked at gaining more information about Atoh1. Also known as Math1, the protein is claimed to be a transcription factor that functions in the nuclei of cells to keep certain genes switched on. Appearing in slightly different forms in a number of species, it is said to be evolutionarily ancient. Supposedly in cells where Atoh1 is at work, it appears to be switched on only during fetal development. That is when cells may be quickly increased to fill different parts of the nervous system.

Investigators however discovered that Atoh1 is active post birth in the fast-dividing granule neuron precursor (GNPs) cells in the cerebellum region of the brain. In the course of time, GNP cells may stop dividing and become mature granule neurons. Experiments conducted in several labarotores a few years ago indicated the role of Atoh1 in keeping GNPs in their fast-dividing state. This could make them more susceptible to developing into medulloblastoma tumors.

“The question for us was whether we could really prove, not just in the cell culture dish or in microarrays but in animals, that Atoh1 plays this role in medulloblastoma,” Zoghbi mentioned.

Much unlike earlier analysis that probably engineered a strain of mice that lack the Atoh1 gene, experts looked at discerning gene’s function a little differently. Scientists discovered that Atoh1-knockout mice may have failed to develop properly in the womb, and died at birth. Hence they gauged Atoh1’s function after birth.

For this, Zoghbi’s team, led by postdoctoral researcher Adriano Flora, conceived a more advanced technique. They first appeared to have bred a strain of mice with a genetic off-switch connected to their Atoh1 gene. Following this, they injected a chemical into the brains of healthy newborn mice. This was mainly done to activate this off-switch and keep the production of Atoh1 in GNPs at bay. This apparently resulted in the maturing of GNPs into granule neurons as they instantly stopped proliferating.

This aftermath, researchers suggest reveals that Atoh1 may have aided in keep GNPs in their ever-dividing state. On delving further, scientists found that Atoh1 could rev up GNPs by switching on a gene called Gli2. The latter is known to be a popular member of the Sonic Hedgehog signaling pathway that helps in the division of cells. In many cancers inclusive of medulloblastoma, the Sonic Hedgehog pathway is also inappropriately switched on.

“At this point we asked whether we could affect the development of medulloblastoma in mice by shutting down Atoh1,” Zoghbi added.

A special strain of mice with a specific genetic mutation that could make them susceptible to developing medulloblastoma was then assigned the local Atoh1-shutdown technique by the team. Sending the Sonic Hedgehog signaling pathway into overdrive, in these mice it is normally observed that a mutant gene is switched on after birth. This could lead to precancerous lesions and tumors in the cerebellum. However these cancerous alterations supposedly never took place when Zoghbi and colleagues switched off Atoh1.

The researcher is of the opinion that Atoh1 could in fact be a key player in the origin of medulloblastoma. Thus it could be a potential target for new drug treatments. Most importantly, the next step for Zoghbi would be to ascertain whether the protein would still be required for tumors to keep growing after they’ve set up.

“If we allow these tumors to develop, and then we take away Atoh1, would that make a difference?” Her lab and others are also now racing to determine what keeps Atoh1 inappropriately switched on in medulloblastoma cells, and what normally switches it off.

Originally, the examination of Atoh1 was taken up by Zoghbi as an exercise in pure biology. She stresses that the fact that it could have relevance to disease was unknown to her.

The findings have been reported in the December 4, 2009, issue of Science.