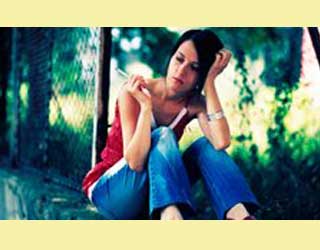 A CDC report talking of teen suicides came to light a few weeks back. Along the same lines, another survey by experts from Kings College London has put forth that 1 in 12 teens apparently self-harm, but most of them give up this habit as they approach 20 years of age.

The report stated that 90% of adolescents who self-harm put a stop to it as they reached young adulthood. On the other hand, those who started self-harm in their 20s were likely to have experienced a troubled adolescence with mental health problems such as anxiety or depression.

The age-group 15 to 24 seemed to be more prone to such behaviors. In this study, the team examined young individuals and followed them through the transition from adolescence to young adulthood between 1992 and 2008.

Self-harm behaviors such as mental issues, smoking, antisocial actions, drug and alcohol use were reported during teenage years. Moreover, persons who encountered stress and anxiety during adolescence were seemingly 6 folds likelier to self-harm as young adults. This was apparently not the case with adolescents devoid of depression or anxiety. Self cutting and burning were the most prevalent forms of self harm found in the analysis.

Dr Moran from the Health Service and Population Research Department at the IoP and Honorary Consultant Psychiatrist in the Self-Harm Service at the South London and Maudsley NHS Foundation Trust cited, “Most adolescent self-harming behaviour resolves itself spontaneously, which should come as a relief to the families of those affected. However, young people who do self-harm often have underlying mental health problems that need to be addressed.”

The investigation essentially unfolded a link between early depression or anxiety and self-harm later in life. Therefore, the scientists urged that seeking remedies for psychological issues during adolescence is likely to prevent adversity and disability related to self-harm in the long run. This will eventually lead to reduction in suicide cases too.