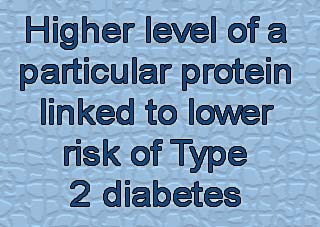 According to a latest study, people with higher levels of the adiponectin protein may have a lower risk of developing Type 2 diabetes. The adiponectin protein which is developed by the fat cells is known to reduce an individual’s likelihood of developing Type 2 diabetes. This discovery was jointly made by Shanshan Li, MD, MSc, of the Harvard School of Public Health, Boston; and colleagues, by assessing the data from previous studies.

Evidently, the beneficial ability of this particular protein was unveiled through an analysis of the earlier conducted studies. Although the link between adiponectin and Type 2 diabetes has been administered by certain studies, there may still be a few doubts about its consistency and strength. Apparently, the association between the risk of developing Type 2 diabetes and plasma adiponectin is still misty.

In order to clear all doubts related to this alleged association, a review was conducted on the previous studies on the topic. Through this analysis these investigators were noted to have discovered that higher levels of this particular protein seemed to be linked with a lower risk of Type 2 diabetes. More so, it was also noted that this association seemed to most often take place in whites, East Asians, Asian Indians, African Americans and Native Americans.

The study investigators explain that, “Although these epidemiologic studies cannot establish causality, the consistency of the association across diverse populations, the dose-response relationship, and the supportive findings in mechanistic studies indicate that adiponectin is a promising target for the reduction of risk of type 2 diabetes.”

Apart from this, it was also stated that with the help of certain pharmaceutical and lifestyle interventions, the level of adiponectin may be increased. Apparently, the respective levels of adiponectin may even prove to be beneficial in identifying those people who may benefit from interventions aimed at treating “dysfunctional adipose tissue” and its related metabolic issues.