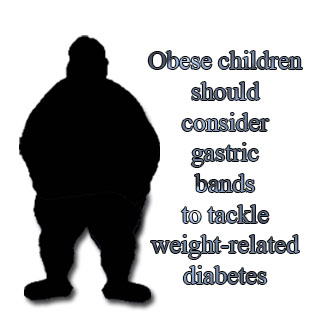 Children suffering from obesity and weight-related diabetes are recommended to be given gastric band surgery. It is said that such children inspite of undergoing surgery are not getting adequate aid and support to change their behavior and lifestyle. An absence of a change in lifestyle could have severe effect on their mortality.

It is said that type 2 diabetes, which is a condition associated with obesity, has spread to all the age groups in the past ten years in Britain. It is estimated that about 900,000 British children fall under the dangerous category of obesity. More than 1000 of these are said to suffer from type 2 diabetes. It is stated that this is a condition which usually affects adults aging over 40 years; however its occurrence is increasing in children as well.

A possible cure for this disease is weight loss. However not many children can follow strict dietary and exercise regimes for the purpose of weight loss. Professor Julian Shield, consultant pediatrician, Bristol University and Bristol Royal Hospital for Children, conducted a study on more than 70 adolescents suffering from type 2 diabetes. It was revealed that these children instead of losing weight, in fact put on more weight in the past one year.

Professor Shield says that such children should be given gastric band surgery from 15 years of age itself. Unless these children lose their excess weight, they may stand a great risk of developing various diseases. Gastric banding consists of fitting an inflatable ring around the top of the stomach, to restrict the amount of food the child can consume in one sitting. This operation is said to cost the National Health Service approximately around £2,500.

Such surgeries are said to have a fatality risk of lesser than one percent, but about 10 percent can suffer from various complications. It is said that such bands are available on the National Health Service for children below the age of 18.

Their findings are present in the Archives of Disease in Childhood.