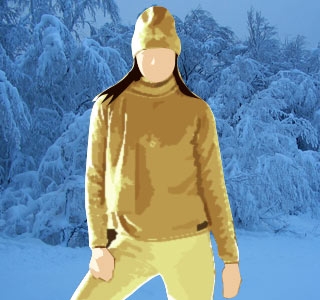 Well who doesn’t indulge in some bird watching? Especially when the weather is cold and harsh outside. Though hard to believe, a novel research now proves that the female body is more attractive in winter.

Conducted by experts at the Wroclaw University in Poland, the study reveals that men ogle at women and find them more desirable during the winter season. Nearly 114 men were a part of the experiment. These men were shown pictures of female bodies every three months over a period of 5 seasons. The photographs were mainly of three kinds – full body portraits of women in black swimsuits, exposed breasts of different sizes, and faces of young women.

“As predicted, ratings of body and breast attractiveness were lower in summer than in winter. This effect may also contribute to observed behavioural fluctuations related to human male-female interactions. The effect we found might cause seasonally different levels of male assessment of female attractiveness or affect males’ mate choice decisions”, they further add.

The participants were then required to rate these photographs at different times of the year. In addition to these photographs the men also tested their own partners for desirability. According to the anthropologists, the men rated women as most desirable in winter, followed by autumn and least of all in summer. These ratings were however only for bodies and breasts. The attractiveness of the faces was not rated differently as the seasons changed.

Based on these scores the researchers mention that the seasonal changes may have a strong effect on mate choice and levels of adultery. Experts claim that though there is no clear explanation for these changes, the rarity of female flesh in winter could be just be making them a tad bit more desirable. Faces of women scored equally in all seasons apparently as they are on display all year round. The pattern of these results was similar in men of all ages no matter whether they lived in urban or rural areas.

Interestingly men when asked to rate their own attractiveness were highly convinced that they are desirable all throughout the year. Very smart we’d say!

As for women, now you know what to do to turn on your man in those chilly winter days.

The current edition of the journal Perception features this study.