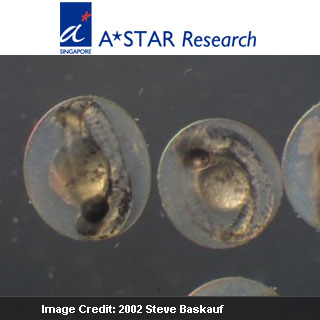 Advancing technology in the field of medical science brings hope to the millions suffering from various grave diseases with cancer standing out among them. Scientists from A*STAR in Singapore and the USA reveal a novel technique that may help keep an eye on cancer. The researchers appear to have developed a fast bioluminescence imaging technique that could probably allow the real-time monitoring of cancer spreading through the body.

The scientists suggest that this new method might also greatly assist in finding drugs capable of targeting mobile or metastatic cancer cells. Apparently chemotherapy treatments for this type of cancer that utilizes ‘anti-migratory’ drugs seems to be essential since some of the most mobile cells that cause metastasis may resist conventional cancer drugs.

Seemingly over the extended survival periods linked with modern cancer therapies, this could pose a problem because patients seem to have a higher risk of developing metastases. The researchers used zebrafish as a model organism and claim to have spotted as few as eight cells that underwent metastasis from glioblastoma multiforme (GBM). GBM is supposedly the most common and aggressive type of brain tumor.

For the development Beng-Ti Ang from A*STAR’s Singapore Institute for Clinical Sciences and co-workers at the University of Singapore and the Methodist Hospital, Cornell University, USA teamed up. The researchers utilized a process called gene transfection to cultivate GBM cells that could express a gene from fireflies. This in turn appeared to cause them to emit light in a process named bioluminescence.

Next, the ‘invasiveness’ of the cells was assessed by measuring how fast they moved through a 3D matrix. The scientists discovered that cells that were most invasive seemed to express a gene that could make them more mobile. Apparently, the same gene had also been earlier correlated with lowered patient survival.

Following this, the researchers injected the GBM cells into zebrafish embryos. They closely observed tumors in the embryos a few days later. The team could watch the action of the bioluminescent tumor cells by placing the embryos under a charge-coupled device camera. They could view their growth and movement around the body and also their invasion on other organs.

“The advantages of the zebrafish are that it is transparent under microscopy imaging, has a fast development cycle (major features are seen within 24 hours after birth), and it is a vertebrate animal,” describes Stephen Wong of the Methodist Hospital.

Additionally the zebrafish tumors were also found to have genomes and development processes very identical to human cancers.

The researchers propose that the innovative bioluminescence screening platform reflects a distinct real-time method that could be used to observe small numbers of cancer cells in a live animal. Besides, it is also claimed to be cheaper, easier and far more sensitive than existing imaging methods. Presently techniques like positron emission or computed tomography scanning, or magnetic resonance or fluorescent imaging are used

Moreover, the finding of a genetic subset of highly invasive GBM cells could also largely aid in the development of drugs that have the ability to target tumor-initiating cells. Currently, the team anticipates use of the platform to screen anti-migration and invasion candidate compounds for GBM treatment. They also plan to augment the platform for drug screening in other invasive tumors and for drug combination analysis.