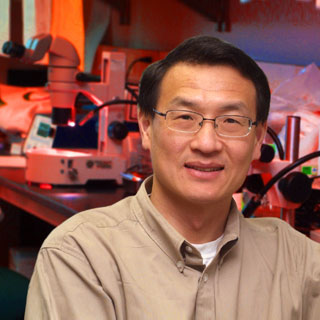 Innumerable findings in the past have given insights into the disabling psychiatric disorder schizophrenia with the most recent one revealing the involvement of a particular human gene. Now, researchers at the Medical College of Georgia claim to have developed a schizophrenia mouse model that should enhance their understanding and treatment of the disorder.

The newly created schizophrenic mouse appears to have been built by reduction in the inhibition of brain cells that may be involved in complex reasoning and decisions about appropriate social behavior. The investigators emphasize that in schizophrenia, it is the important balance between excitation and inhibition of these cells that seems to go haywire. Theirs is claimed to be the first animal model that analyzes the disorder.

“We believe the mouse, which exhibits some of the same aberrant behavior as patients with this disorder, will help identify better therapies,” remarked Dr. Lin Mei, a developmental neurobiologist who directs MCG’s Institute of Molecular Medicine and Genetics. “We are doing testing to see if antipsychotic drugs already on the market are effective in treating the mouse.”

The scientists at MCG were apparently able to make the mouse by deletion of a candidate gene for schizophrenia namely ErbB4 from interneurons. Seemingly, interneurons are known to be the brain cells that aid in showering larger decision-making neurons which are called pyramidal cells, with inhibition.

The scientists’ previous work apparently helped recognize the functioning of ErbB4 and another candidate gene, neuregulin-1. They analyzed how the two worked together to balance the activity of these pyramidal cells. In May 2007, they had reported in Neuron that the two help to maintain a healthy balance between excitation and inhibition. They appeared to have done so by augmenting the release of GABA which was found to be a major inhibitory neurotransmitter in the inhibitory synapses of the brain’s prefrontal cortex.

Approximately seven years earlier, they had also demonstrated the two to put a damper on excitatory synapses. The latter are known to be communication points between neurons where cells are excited to action by the neurotransmitter glutamate.

Taking these findings a step further, this time around, the scientists modified the natural check and balance in cells that could be directly engaged in supplying pyramidal neurons with the inhibitor GABA. For this, they claimed to have knocked out the ErbB4 gene in close by chandelier and basket interneurons that appeared to have supplied GABA to pyramidal cells.

“If we take out ErbB4 in these two interneurons, the neuregulin should have no effect because it can’t promote GABA,” Dr. Mei, Georgia Research Alliance Eminent Scholar in Neuroscience, commented.

Apparently, the researcher’s postulation played out in the behavior of the mouse. The animal seemed to display schizophrenia-like behavior which including increased movement and impaired short-term memory. Currently, the scientists claim to be still collecting data on the manic aspect of schizophrenia in their mice.

In one of their tests, they found both the normal and knockout mice gained information that they would find a food pellet in each arm of an eight-armed chamber. However they learnt that that if they went to the same arm for seconds, there would eventually be none. The knockouts seemed to have taken longer to learn and finish the task. Besides, the knockouts also appeared to have spent much more time sniffing and snooping around and revisiting empty arms.

Another test revealed that the knockouts could not or rather were not able to relate that a relatively low noise would be followed by a slightly louder one. However when they were treated with diazepam, an anti-anxiety medication, they appeared to have showed a response identical to the normal mice.

Dr. Mei doubts that if he was able to observe the chandelier and basket interneurons in the prefrontal cortex of schizophrenics, they would also reveal something wrong about their usual role of sensing the need for the inhibitor GABA and supplying it to the pyramidal cells.

The findings are published Dec. 28 in PNAS.