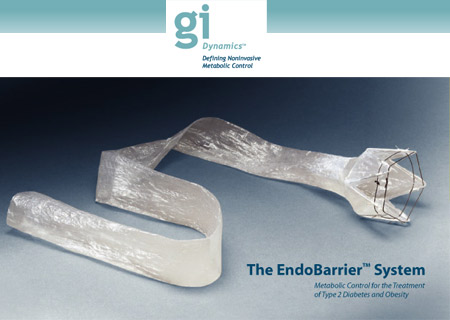 Here’s some great news for individuals suffering from type 2 diabetes and obesity. A recent announcement reveals that GI Dynamics has attained the European CE mark approval for the innovative EndoBarrier Gastrointestinal Liner system.

The system marks the entrance of a non-surgical therapy to treat type 2 diabetes and obesity. With the CE marking, the product has been certified to have met EU requirements for marketing in Europe. In addition to this, clinical trials that included over 270 patients claim to have exhibited the significant weight loss and diabetes improvement achieved with the EndoBarrier Gastrointestinal Liner.

Jan Willem Greve, M.D., Ph.D., Gastrointestinal and Bariatric Surgery, Atrium Medical Center Parkstad Heerlen, Netherlands, stated, “Based on the clinical results to date, we believe the EndoBarrier, as part of a multidisciplinary approach, has the potential to change the treatment paradigm for type 2 diabetes and weight problems. Due to its unique profile as a non-surgical and non-pharmaceutical treatment option, the EndoBarrier appears to provide the benefits of gastric bypass surgery without the complications and risks associated with surgery. Unlike traditional pharmaceutical approaches, this implantable device removes the burden of dose regimen compliance from the patient. We look forward to having access to the EndoBarrier as a new treatment option in our fight against these epidemics.”

Reportedly an estimated 21 million Americans and 200 million people worldwide are affected by type 2 diabetes. The World Health Organization indicates type 2 diabetes to comprise 90% of people with diabetes around the world, and largely the result of excess body weight. Significant health problems that could be a result of the disease include cardiovascular disease, retinopathy, neuropathy and nephropathy.

“This European approval for six months of EndoBarrier therapy to treat type 2 diabetes and obesity is another key milestone for GI Dynamics as we continue to prepare to launch the product in Europe,” mentioned Stuart A. Randle, chief executive officer of GI Dynamics. “The growing body of clinical data demonstrates the EndoBarrier is well positioned to offer a meaningful, non-surgical approach to controlling diabetic factors and facilitating weight loss in patients suffering from the twin epidemics of type 2 diabetes and obesity. With European marketing approval in hand, we look forward to initiating our commercialization plans in Europe in the first half of 2010.”

The EndoBarrier Gastrointestinal Liner is revealed to be an enhanced investigational and non-surgical medical device that finds its roots on the EndoBarrier technology platform for apparently treating type 2 diabetes and obesity. It is placed in the GI tract endoscopically through the mouth to produce a barrier between food and the wall of the intestine.

Physicians are of the opinion that preventing food from coming into contact with the intestinal wall could change the activation of hormonal signals that originate in the intestine. This could thus help in imitating the effects of a Roux-en-Y gastric bypass procedure without surgery.

Furthermore the potential of the system to completely transform the treatment landscape for people living with type 2 diabetes, obese people at risk for type 2 diabetes, and people with severe weight has been supported by progressing pre-clinical and clinical evidence.

You can expect this system to be available in the first half of 2010 in Europe.