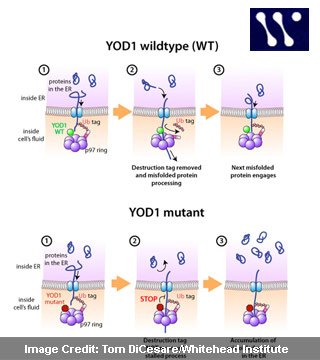 Researchers at the Whitehead Institute have recently brought to light how our systems may function in the event of cell’s protein disposal being jammed. The scientists suggest that a protein known as YOD1 plays a significant part in the disposal of misfolded cellular proteins. Supposedly multiple disorders inclusive of neurodegenerative diseases such as Parkinson’s and Alzheimer’s have been linked to the inability of cells to properly throw out errant proteins.

As part of the distinct research, experts blocked the function of YOD1 to identify its role. This included a manipulation that stopped the complete elimination of several misfolded model proteins. With this finding, scientists should be able to better comprehend this vital yet complex cellular process.

“It’s a great platform to dissect in the test tube how these complicated processes work,” mentioned Whitehead Member Hidde Ploegh. “The most exciting prospect would be that we could use this information to identify the channel through which these misfolded proteins are extracted from the ER, and that would potentially give us a new window on the process.”

The researchers when analyzing human kidney cells discovered that YOD1 is an important part of a ring-shaped protein complex. This complex was found to pull misfolded proteins from a cellular compartment, called the endoplasmic reticulum (ER) into the surrounding cellular fluid. Practically all secreted proteins were found to be assembled and folded into their appropriate shapes in the ER. Proteins that were improperly folded could cling together, consequently clogging the ER. This, the experts say could be really harmful

“This is a life-threatening situation for the cell, so there is a constant quality control going on that gets rid of these misfolded proteins,” says Robert Ernst, a co-first author on the Molecular Cell paper and postdoctoral researcher in the lab of Whitehead Member Hidde Ploegh.

The cell appears to tag the protein for demolition again upon passage of the stripped misfolded protein through the protein ring. Nevertheless, this time around the tags seem to stay in place, shuttling the misfolded protein to a membrane-bound sack called the proteasome. The potent activity of the sack degrades proteins to their constituent parts.

This research has been reported this month in Molecular Cell.