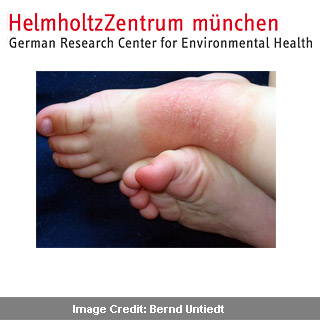 Eczema may be seen as a persistent skin condition having obvious physical significance. However a new study surprisingly now reveals that eczema in early childhood may have the potential to affect behavior and mental health later in life. This was put forth by scientists of Helmholtz Zentrum Munchen in collaboration with colleagues of Ludwig-Maximilians-Universitat (LMU), Technische Universitat Munchen (TUM) and Marien-Hospital in Wesel, North Rhine-Westphalia.

This interesting finding of a prospective birth cohort study shed light on the association between eczema and mental health among children at age 10 years. As part of the study, the scientists followed around 5,991 children born between 1995 and 1998.

The experts uncovered that children suffering from eczema over the first two years of life seme to have higher chances of exhibiting psychological abnormalities. The analysis was led by Assistant Professor Jochen Schmitt of Dresden University Hospital, Dr. Christian Apfelbacher (Heidelberg University Hospital) and Dr. Joachim Heinrich of the Institute of Epidemiology of Helmholtz Zentrum Munchen.

The results supposedly indicated particular emotional problems, at age ten years as compared to children of the same age who may not have suffered from the disease. The scientists suggested that in children whose eczema appeared to persist beyond the first two years of life, the presence of mental health problems seemed more evident. This was against children who had eczema only in infancy.

“This indicates that eczema can precede and lead to behavioral and psychological problems in children,” Dr. Heinrich explained.

Scientists closely tracked the family history of the children within the framework of the GINIplus study. Collecting data on their physical health and emotional condition at age 10 years, they also garnered information on their daily lives. Along with questions about the course of disease including in early childhood, the scientists specially focused on diseases like eczema, asthma, allergic rhinitis, stress tolerance and behavioral abnormalities.

“We suspect that it is mainly the secondary symptoms that have a long-term effect on the emotions of the affected children,” Heinrich further mentioned.

According to the study authors, in the children’s medical records it is hence recommended to document the occurrence of eczema as a seemingly potential risk factor for psychological problems that may take place later. This was suggested even if the actual primary disease abates and disappears during the course of childhood.

The current issue of the Journal of Allergy and Clinical Immunology 125 (2010) has published this study.