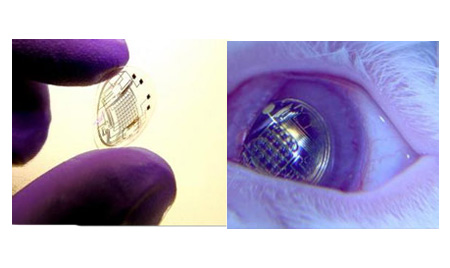 Have you heard of contact lenses which are used for a purpose other than eyesight correction? A group of engineers at the University of Washington have developed contact lenses that can display information about all the incoming calls on a mobile phone. Confused about it? Well, read on!

It is known that an electronic circuit and LEDs have been embedded into the prototype contact lenses. The trials were conducted on rabbits. The lenses were placed in the rabbits’ eyes for around twenty minutes, after which no negative effects were noticed.

As of now, however, the electronic circuit in not yet functional and the lights don’t work as yet. What is known is that having these lenses in your eyes, will surely not obstruct your view.

The circuits from layers of metal, which measure around one thousandth the width of a human hair and constructed light-emitted diodes one third of a millimeter across. The developers have used grayish powder of electrical components onto a sheet of flexible plastic.

A combination of radio-frequency power and solar cell power will then be fitted on to the lens.

According to Babak Parviz, a UW assistant professor of electrical engineering, “People may find all sorts of applications for it that we have not thought about. Our goal is to demonstrate the basic technology and make sure it works and that it’s safe.”

After the technology is fully functional and ready for commercial applications, it could be used by drivers, allowing them to keep track of the speed of the vehicle. It may also be used by pilots for viewing the plane’s coordination while flying. These revolutionary contact lenses could well be applied by video game developers, taking gamers one step closer to virtual reality!

“There is a large area outside of the transparent part of the eye that we can use for placing instrumentation. The developments in the future will add wireless communication to and from the lens. The researchers anticipate powering the whole system using a combination of radio-frequency power and solar cells placed on the lens,” explained Parviz.

The prototype contact lens cannot really correct the wearer’s vision however. But, the technique can be used on corrective lenses.