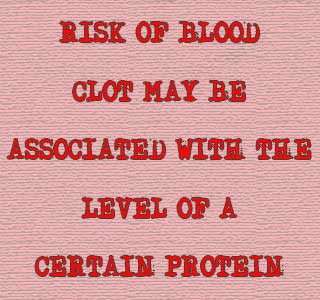 A team of experts have stated that a high amount of albumin protein in the urine may possibly increase the risk of developing blood clots in the deep veins of the legs and lungs. This study was conducted by Bakhtawar K. Mahmoodi, B.Sc., of the University Medical Centre Groningen, the Netherlands, and colleagues.

The development of blood clots in the deep veins of the legs and lungs is also known as venous thromboembolism or VTE. These experts have stated that the presence of albumin in urine or microalbuminuria may be linked with the variation in the amount of various coagulation proteins. It has been stated that these experts conducted this study with the aim of determining whether microalbuminuria may some how be linked with VTE.

This study was conducted on more than 8,000 subjects. In the average follow-up period of about 8.6 years, it was observed that about 129 of these subjects seemingly developed a minimum of one VTE.

The experts have stated that, “The fact that microalbuminuria has a high prevalence in the general population (7.2 percent) suggests that on the population level, microalbuminuria may be an important risk factor for VTE. Moreover, in contrast to most of the established VTE risk factors, microalbuminuria could be treated by nonanticoagulant medication. Future studies are needed to evaluate the effect of these drugs on the risk of VTE.”

This study was published in the JAMA issue.