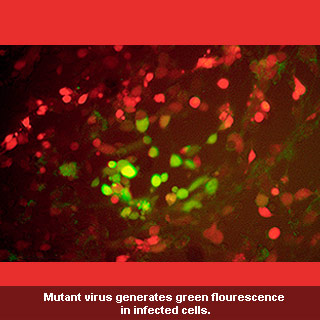 Scientists are trying out different methods to find an effective treatment for various diseases affecting millions of people. A Yale School of Medicine neuroscientist examining how viruses may be used to assault brain cancers has apparently crafted a novel technique to produce new, color-coded proteins that may be utilized by experts investigating treatments for several diseases.

The two scientists illustrate how to utilize a mutation-prone virus engineered to express fluorescent proteins so as to produce new proteins of interest to researchers. This virus apparently not only produces mutated genes that code for these proteins but can also express them in cells so study authors could examine their function. The procedure appears to have the likelihood to streamline research to recognize and study new mutant proteins.

Instead of attempting to produce new proteins from gene mutants in several bacteria colonies, one can find them under the microscope in five minutes because altered fluorescent proteins are of different colors. This was mentioned by Anthony N. van den Pol, professor of neurosurgery and member of the Yale Cancer Center.

Van den Pol’s lab has supposedly created viruses that may selectively assault and destroy cancer cells. Formerly, scientists apparently had to discontinue experiments at diverse intervals to gauge the consequences of diverse agents on tumors. The use of proteins that appear to exhibit dissimilar color fluorescence enables scientists to concurrently see in culture dishes or mice, cancer killing viruses that supposedly express one color and live cancer cells that may express a diverse color.

Van den Pol mentioned that several scientists at Yale now use fluorescent proteins to study mechanisms of replication, migration, and differentiation in normal and cancer cells. The potential for rapidly generating novel mutant fluorescent proteins may help in these endeavors.

The study was published in the February issue of the Journal of Virology.