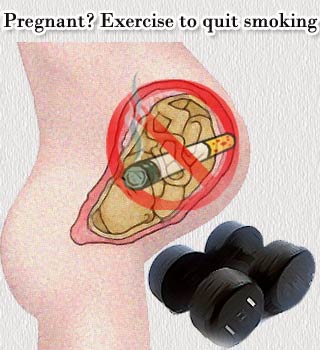 Two novel studies by researchers in the UK reveal that physical exercise may be effective in helping pregnant women kick the butt. Smoking during pregnancy is known to lead to lower birth weights and higher infant mortality rates. It is also associated with learning difficulties, problem behaviour and asthma in childhood.

The dual pilot studies were conducted by a team of researchers led by Michael Ussher from St. George’s University Of London. Both the studies involved 32 pregnant women about 12 to 20 weeks into pregnancy, aged above 18 years and who smoked at least one cigarette a day.

Dr. Ussher commented, “These results are very encouraging and we are now conducting a randomized controlled trial with 850 women. Regular exercise is ideal for any pregnant women who smoke as it’s obviously safe and the benefits are enormous.”

While one study included women who exercised once a week for six weeks under supervision, in the other study women participated in two exercise sessions per week again for six weeks followed by one session a week for three weeks. Along with being encouraged to participate in any form of physical activity or exercise on their own, all these volunteers also received advice and counseling to stop smoking and becoming more active.

Results of the study showed nearly one in four women participants to have given up smoking before the birth of their baby. Additional positive benefits of the program included weight loss, improved self-image and reduced cravings. The number was interestingly quite similar to the number of non-pregnant smokers who had quit using nicotine replacement.

Researchers thus concluded that exercise could in fact even help non-pregnant women give up smoking as some evidence suggest that it is effective in reducing the cravings experienced by smokers.

The new study is part of the open access journal BMC Public Health.

Acupuncture may be effective in relieving Menstrual Pain