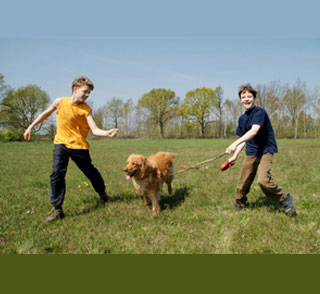 Previously we had reported about an investigation which suggested that adopting a pet therapy aids patients recuperating from total joint-replacement surgery. And here is another article that adds to the list of health benefits to pet owners. According to a recent study, dog ownership can boost physical activity among adolescents.

Apart from being a person’s best friend, the pet dog is also seems to be a social support tool for being active. As a part of the study, investigators surveyed 618 pairs of Minneapolis adolescents and their parents about the number of dogs in their home and how much time they spent in physical activity. 318 teens were made to wear accelerometers for a week to calculate the time spent moving. Teenagers from dog-owning families apparently recorded greater amounts of movement on the accelerometer devices. The results were ascertained after considering demographic variables such as gender, race and socioeconomic status.

It was concluded that teens with dogs possibly spend 15 more minutes of moderate to vigorous physical activity per week. In spite of the link established between dog ownership and teenagers’ physical activity, authors were unable to claim that getting a dog means people will be more active. John Sirard, Ph.D., the study’s lead author and an assistant professor at the University of Virginia in Charlottesville and colleagues note that more active people choose to get dogs because it fits their lifestyle already.

The study will be published in the March issue of the American Journal of Preventive Medicine.

New weight loss techniques could be used as alternatives to liposuction