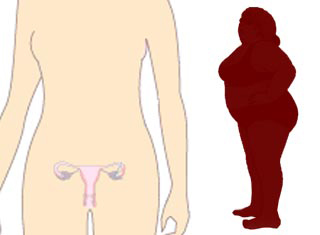 Obesity has always had some major negative effects in the people suffering from it. Infact it is in itself a big negative effect of some other health issue. A latest study claims that obesity is also responsible for putting women at the risk of Ovarian Cancer.

The study was led by Dr. Michael F. Leitzmann of the National Cancer Institute and colleagues who studied 94,525 U.S. women belonging to the age group of 50-71 years. It was carried for seven years.

Described as the most fatal of the gynecologic cancers, ovarian cancer has been found to develop when obesity plays foul with the hormonal mechanism in women’s body. Ovarian cancer has a 5-year survival rate of just 37 percent.

Over the period of seven years of study, researchers found 303 cases of ovarian cancers and discovered that women who had never taken hormone therapy post menopause were subject to obesity and risk of the cancer in them were higher by 80 percent. Also, researchers found that in women who did not opt for post menopausal hormone therapy there was no link between body mass and cancer.

As per the researchers’ theory, in postmenopausal women, excess of body mass causes increased levels of estrogen which may encourage growth of ovarian cells. This may in turn lead to the womb cancer.

“The observed relations between obesity and ovarian cancer risk have relevance for public health programs aimed at reducing obesity in the population,” the authors have written.

Although, obesity has been previously linked to other forms of cancer, this is perhaps the new evidence towards obesity and its role in ovarian cancer.