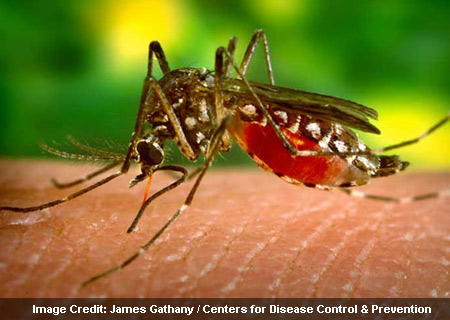 Dengue fever is said to cause severe flulike symptoms and is claimed to be among the world’s most imperative public health problems. Approximately, 50-100 million cases are seen per year and almost 40% of the worldwide population is at risk of contracting this disease. The dengue virus is believed to be transmitted via the bite of contaminated female Aedes aegypti mosquitoes, and currently there appears to be no vaccine or treatment.

A new research from UC Irvine and British Scientists claim that a new strain of mosquitoes in which females cannot fly may perhaps aid in reducing the spread of dengue fever. UCI researchers and colleagues from Oxitec Ltd. and the University of Oxford supposedly developed the new breed. Flightless females are anticipated to die quite fast in the wild, thereby curbing the amount of mosquitoes and decreasing or even getting rid of dengue transmission. Males of the strain apparently fly but do not bite or spread the disease.

When hereditarily modified male mosquitoes mate with wild females and pass on their genes, females of the next generation are apparently flightless. Researchers are of the opinion that if released, the new breed may be able to adequately repress the native mosquito population in around six to nine months. The technique may provide a secure, capable option to destructive insecticides.

Anthony James, Distinguished Professor of microbiology & molecular genetics and molecular biology & biochemistry at UCI and an internationally recognized vector biologist, commented, “Current dengue control methods are not sufficiently effective, and new ones are urgently needed. Controlling the mosquito that transmits this virus could significantly reduce human morbidity and mortality.”

By means of concepts crafted by Oxitec’s Luke Alphey, the study’s senior author, scientists apparently created an inherent change in the mosquitoes that may disturb wing muscle growth in female offspring, thereby rendering them flightless. Males’ capability to fly may be unchanged, and they appear to exhibit no ill effects from having the gene.

Alphey commented, “The technology is completely species-specific, as the released males will mate only with females of the same species. It’s far more targeted and environmentally friendly than approaches dependent upon the use of chemical spray insecticides, which leave toxic residue. Another attractive feature of this method is that it’s egalitarian: All people in the treated areas are equally protected, regardless of their wealth, power or education.”

James and Alphey have supposedly commenced the development of genetically altered mosquitoes to curb the spread of vector-borne illnesses. While their present research is centered on the dengue fever vector, they observed that this technique may be modified to other mosquito species that transmit diseases like malaria and West Nile fever.

The research will appear in the Proceedings of the National Academy of Sciences.