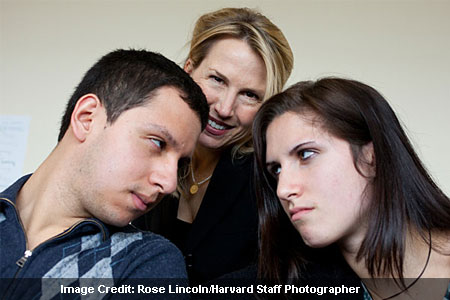 We all must have heard the old adage suggesting domestic partners should never go to bed angry if they intend to have a successful relationship. Now, a new research from a psychologist at Harvard University indicates that brain activity particularly in the lateral prefrontal cortex seems to be a much better guide on how an individual would feel in the period after a fight with a partner.

It was found that people who display more neural activity in the region called the lateral prefrontal cortex have lesser chances of being upset the day after they fought with their partners. The brain area has been pointed as playing a significant part in the regulation of emotions. The findings also indicate that improved function within this region could probably boost day-to-day mood.

Earlier analysis has exhibited the association of the lateral prefrontal cortex with emotion regulation. Though shown in laboratory tests, the effect never seems to have been proved to be connected with experiences of everyday life.

“What we found, as you might expect, was that everybody felt badly on the day of the conflict with their partner,” remarked lead author Christine Hooker, assistant professor of psychology in Harvard’s Faculty of Arts and Sciences. “But the day after, people who had high lateral prefrontal cortex activity felt better, and the people who had low lateral prefrontal cortex activity continued to feel badly.”

The innovative research engaged healthy couples who had been in relationships for longer than three months. The neural activity of participants was recorded as they reacted to the images of their partners with positive, negative, or neutral facial expressions in an fMRI scanner. In the lab, the participants were also tested for their cognitive control skills. This included their ability to manage impulses as also the shift and focus of attention. The couples were also revealed to have recorded their daily emotional states for three weeks including whether they had had fights with their partners.

It was discovered by Hooker that participants who showed greater activity in their lateral prefrontal cortex when observing their partner’s negative facial expressions were supposedly less likely to have a negative mood the day after a fight. This probably indicated that they had a better ability to ‘bounce back’ emotionally after a squabble.

Seemingly those who showed more activity in the lateral prefrontal cortex along with greater emotional regulation after a fight were also found to have more cognitive control in laboratory tests. Hooker suggests that this could be a sign of a relationship between emotion regulation and broader cognitive control skills.

“The key factor is that the brain activity in the scanner predicted their experience in life,” added Hooker. “Scientists believe that what we are looking at in the scanner has relevance to daily life, but obviously we don’t live our lives in a scanner. If we can connect what we see in the scanner to somebody’s day-to-day emotion regulation capacity, it could help psychologists predict how well people will respond to stressful events in their lives.”

She acknowledges that additional work is needed for the development of clinical applications for the research. However the lateral prefrontal cortex could be associated with offering information on an individual’s vulnerability to develop mood problems following a stressful event. This seems to pose the question whether augmenting lateral prefrontal cortex function may improve the capacity to regulate emotion.

The research features in this month’s Biological Psychiatry.

Exercise and Physical Activities are a Must to Cut Risk of...