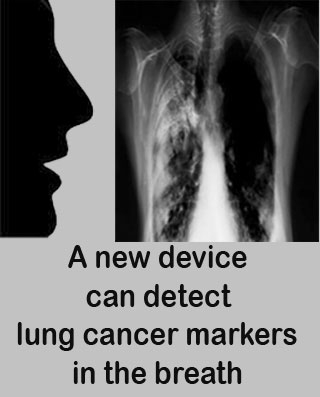 Researchers at the Israel Institute of Technology have developed a diagnostic system that, through the patient’s breath, can supposedly diagnose lung cancer. The researchers, developed this device by making use of an array of nanotube devices, each coated with a different organic material.

This study was led by Hossam Haick, Ph.D. He and his colleagues created devices which comprised of random networks of single-walled carbon nanotubes. Each was coated with 1 of 10 different insulating non-polymeric organic materials. They made use of standard microprocessor fabrication techniques to create the sensors. Different organic materials were used to coat the nanotubes. Due to this, when each sensing device was exposed to a wide variety of volatile organic chemicals present in human breath, gave a unique response.

According to the researchers, there are more than 200 volatile organic chemicals present in the human breath.

The researchers captured the breath of 15 non-smoking healthy patients and 15 people suffering from stage 4 lung cancer. They concentrated the organic compounds in each breath sample, through the solid phase micro-extraction method. They later analyzed the samples using gas chromatography-mass spectrometry (GC-MS). The GC-MS is an expensive technique, which can’t be used as part of a routine diagnosis. Although this technique is very accurate it is very time-consuming.

They then analyzed and tested the samples through their own sensor arrays. The output of the test devices changed in such a way that accurately showed the mixture of organic compounds found in the breath samples.

The findings of the researchers helped them distinguish between two response patterns from each of the 10 array members. In these tests the response patterns between healthy and lung cancer patients had no common characteristics.

It is stated that the researchers have started testing this system on patients and healthy subjects at a larger scale.

The detailed findings are available in the paper “Detecting simulated patterns of lung cancer biomarkers by random network of single-walled carbon nanotubes coated with nonpolymeric organic materials.” It is published in the Nano Letters journal.