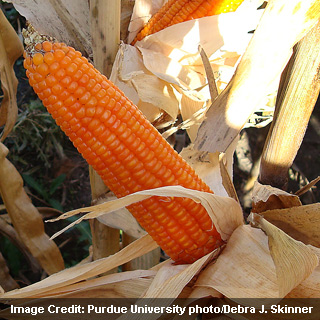 Did you know that orange corn may prove to be beneficial for a child’s well-being? A new study from Purdue University claims that reducing or augmenting the function of a recently found gene in corn may boost vitamin A content. It could also encompass considerable implications for dropping childhood blindness and mortality rates. Torbert Rocheford, the Patterson Endowed Chair of Translational Genomics and professor of agronomy at Purdue, headed the study.

The expert seems to have made a few discoveries in yellow and predominantly orange corn. The orange color comes from comparatively elevated levels of carotenoids, one of which appears to be beta-carotene. Humans seem to change beta-carotene, which also appears to be copious in carrots, into vitamin A during digestion.

Around 2,50,000 to 5,00,000 children predominantly in Africa and Southeast Asia go blind every year due to vitamin A deficiency, as per the World Health Organization. Half of those children may die within a year of turning blind. Rocheford mentioned that augmenting beta-carotene levels in cereal grains, like corn could be an inexpensive approach to deal with these deficiencies in developing countries.

Rocheford mentioned that the gene beta-carotene hydroxylase 1 (crtR-B1) appears to modify beta-carotene in corn in a way that decreases pro-vitamin A activity. Via a procedure called hydroxylation, beta-carotene is said to be changed into other carotenoids that could slash the quantity of pro-vitamin A that is developed through digestion in half, or eradicate it altogether. Decreasing the role of the crtR-B1 gene could decrease hydroxylation significantly.

On the contrary, ‘strong alleles’ augmenting crtR-B1 role may increase the hydroxylation process, which generates more zeaxanthin. It is believed to be a micronutrient that could defend against macular degeneration. Zeaxanthin seems to make up for approximately 75 percent of the central macula in human eyes. This was as per the American Macular Degeneration Foundation.

Rocheford’s study may carry on searching for ways to enhance the nutrient profile of orange corn via easy visual selection and more superior DNA and complex examination. He mentioned that more attempts could concentrate on other genes that seem to hold promise to augment pro-vitamin A in corn.