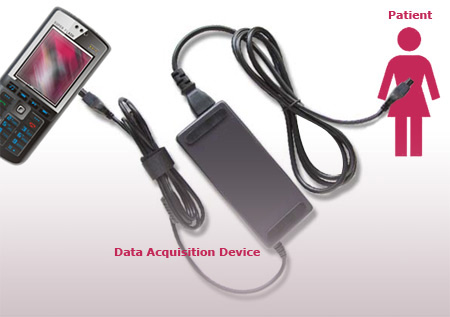 Could you ever imagine that technology advancement could literally reach inside our homes, wherein you can have a simple access to medical centers that has ultrasounds, X-rays, magnetic significant images and other medical imaging technology? The Hebrew University of Jerusalem has researched a new way which would have the potential to achieve all types of medical images in your hand through the modest mobile phone. Prof.Boris Rubinsky has designed this lucrative technology which provides sophisticated radiological diagnoses and treatment to most parts of the world’s population that is unable to gain access to such technology. This technology would prove to be a plus point for those who live at far distances from the modern medical centers.

This innovative concept assumes that it has the ability to restore the current systems based on traditional, stand alone medical imaging devices with a new one. There would be two separate independent parts which would be connected to the cellular phone technology.

According to the World Health Organization, this radiological diagnosis is effective right from detecting tumors to the detection of signs of active tuberculosis infections, and also examines the health of developing foetuses during pregnancy.

Prof. Rubinsky says, “Imaging is considered one of the most important achievements in modern medicine. Diagnosis and treatment of an estimated 20 percent of diseases would benefit from medical imaging, yet this advancement has been out of reach for millions of people in the world because the equipment is too costly to maintain. Our system would make imaging technology inexpensive and accessible for these underserved populations”.

What exactly is involved in this new technology? It would entail an independent data acquisition device (DAD) wherein any patient who is at a distant place can locate it with limited controls and no image display capability would be connected through the cellular phone technology.

The mobile phone is attached to the data acquisition device which would transmit the raw data to the central server where this information would help in creating an image. The server dispatches the image back to the cell phone, and could be displayed on the handset. The images are well tailored, compacted to a mere kilobytes and are affordable.

Rubinsky stresses the key economic benefits of this new method, by stating, “By simplifying the apparatus at the patient site, it reduces the cost of medical imaging devices in general. It also removes the need for advanced imaging training of the personnel at the patient site”.

To display the viability of using the cell phones in medical imaging, the researchers selected the electrical impedance tomography (EIT). The EIT runs on the theory that diseased tissue transmits electrical currents in a different way from healthy tissue. This is then translated into an image, and then to cell phone technology.