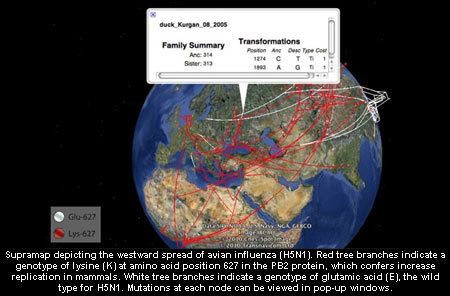 The ability to predict and respond to outbreaks of infectious diseases should certainly work to the advantage of health officials and national security experts. A powerful new web-based application called Supramap intends to do just that as it seemingly tracks down pathogens in time and space as they evolve.

Designed to curb outbreaks by detecting the pathogens in real time, this robust application operates on parallel programming on high-performance computing systems at Ohio State University and the Ohio Supercomputer Center.

It apparently reveals the ability to enable any user to input raw genetic sequences of a pathogen’s strains. Based on mutations, it may then develop an evolutionary tree. Sporting pop-up windows to display how strains may mutate in real time and infect new hosts, the branches appear to be projected on the globe.

“This tool has a lot of predictive power,” mentioned Ward Wheeler, curator in the Division of Invertebrate Zoology at the American Museum of Natural History. “If the movement of a pathogen is related to bird flyways, for example, and those routes are shifting because of something like climate change, we can predict where the disease might logically emerge next.”

“We package the tools in an easy-to-use Web-based application so that you don’t need a Ph.D. in evolutionary biology and computer science to understand the trajectory and transmission of a disease,” adds Daniel A. Janies, first author of the paper and an associate professor at Ohio State University.

The research paper includes Wheeler and colleagues’ findings on Supramap’s capability. Tested on recent strains of avian influenza (H5N1), the evolutionary tree appears to be based on 239 sequences of the specific gene polymerase basic 2. It apparently shows that host shifts are highly correlated with a particular gene mutation permitting avian viruses to acclimate to mammalian hosts.

The program was officially announced on April 9, 2010, in a paper in Cladistics.