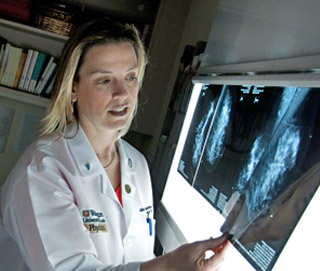 To treat breast cancer many women may be recommended to undergo a surgery. An analysis by the Washington University School of Medicine, St. Louis apparently claims the benefits of giving an estrogen before the surgery. The intake of estrogen seems to enable women to go through lumpectomy, a breast-conservation surgery rather than mastectomy.

This vast study encompassed 352 postmenopausal women with estrogen-receptor positive (ER+) breast tumours from 118 hospitals across the country. 16 weeks before the surgery for breast cancer, all the participants were provided with aromatase inhibitors also known as estrogen-lowering agents. This helped the investigators to observe the before and after effects of the drug treatment on tumours.

Matthew J. Ellis, MD, PhD, the Anheuser-Busch Endowed Chair in Medical Oncology, a breast cancer specialist and the lead author, explained, “Aromatase inhibitor therapy shrank the tumours in many of these women and improved surgical outcomes. These results will encourage a change in practice across the country so that more women can benefit from the currently underutilized approach of administering estrogen-lowering agents before surgery.”

In all the cases of women with breast cancer, three quarters seem to face ER+ breast tumours. It is assumed that the main function of an estrogen is that it bothers with the body’s production of estrogen. These hormones are actually believed to enhance the growth of ER+ breast tumours. Apart from the fact that all the participants were either in the phase of stage II or III breast cancer, they were divided into three groups.

The first group included those women in whom breast-conservation surgery could possibly be conducted, but it would have called for several other surgeries. The other group could not undergo a breast-conservation surgery. The last group consisted of women who may undergo mastectomy, but it was not possible to extract cancer completely. It should also be understood that all the participants had tumours sized an inch or larger and they were probably spread to the lymph nodes in the underarm area.

Ellis said, “ER+ breast cancer can be thought of as a chronic disease because patients generally take estrogen-lowering agents for many years after surgery to repress recurrence. In other chronic diseases, such as hypertension or diabetes, a patient’s response to treatment is continually monitored. But we’ve never done that with breast cancer. By treating breast cancer patients with estrogen-lowering drugs for three or four months before surgery, we can monitor treatment response and then specifically tailor surgical and post-surgical treatment based on this response.”

The authors everyday randomly gave the participants either gave an exemestane (25 mg), letrozole (2.5 mg) or anastrozole (1 mg). They were all type of estrogen itself but no significant differences appeared.

The study will be presented on June 7 at the annual meeting of the American Society of Clinical Oncology.

Depression in teens likely to be associated with postnatal depression