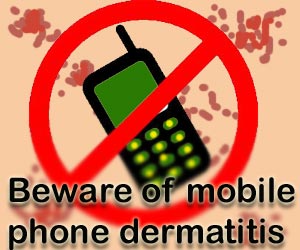 The mobile phone sector is certainly booming considering there are new devices with new technology and novel designs coming out practically every other day. We guess the darn thing however can’t stop being in the news for all the wrong reasons too. Yes the infamous mobile phones at least as far as the medical field is concerned are under the scanner yet again.

Seen in people who spend hours on the phone, the British Association of Dermatologists (BAD) reveals that several published case reports of patients with unexplained rashes on their face and ear were found to be linked with mobile phone usage. Skin experts hence give the high sign to mobile phone users because the device could give users rashes on their face and ears due to allergic reactions to the nickel on the handsets.

One of the study authors, Dr Lionel Bercovitch, of Brown University, Rhode Island, remarked, “Nearly half of the phones we spot tested contained some free nickel. The menu buttons, decorative logos on the headsets and the metallic frames around the liquid crystal display (LCD) screens were the most common sites. Given the widespread use of cell phones, the presence of metal in the exterior casing of these phones and the high prevalence of nickel sensitisation in the population, it is not surprising that cell phones can cause allergic contact dermatitis.”

“The allergy results from frequent skin contact with nickel-containing objects. Prolonged or repetitive contact with a nickel-containing phone is more likely to cause a skin reaction in those who are allergic. If you have had a previous reaction to a nickel-coated belt-buckle or jewellery, for example, you are at greater risk of reacting to metal phones,” adds Dr Graham Lowe, from the BAD.

As part of a previous study published early this year researchers in the US tested for the presence of nickel in 22 popular handsets from eight different manufacturers along with a Bluetooth headset. The researchers found the metal to be present in nearly 10 of the models. Many handsets these days contain some amount of nickel, particularly the buttons and casing.

A close investigation of patients showed that nickel in the mobile phone handsets was the culprit for skin reactions. Called Mobile phone dermatitis, women are the ones who have the highest susceptibly to such reactions. This is mainly because they have earlier been sensitised to nickel after it was found to have allergic reactions in the form of nickel-coated jewellery especially the high end and fashionable ones.

Experts at the BAD are putting cellphone users on guard. People are being given a pointer that if they do happen to develop a rash on their face, they must visit their doctor at the earliest. Blaming prolonged mobile phone use for the kind of dermatitis, researchers tip off that the condition could prove serious if left untreated.

So beware and wise up. Watch out if you can’t bear to be estranged from your beloved cellphone. Mobile phone dermatitis could just be on its way!