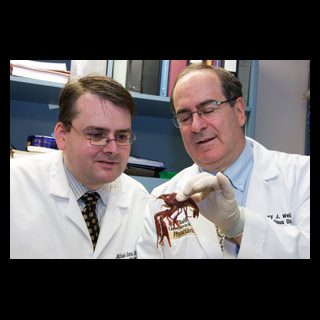 Paragonimus kellicotti is a parasite commonly found in crayfish, so individuals eating this fish raw may end up suffering from a severe parasitic infection. This parasite is suggested to be characterized with fever, cough, chest pain, shortness of breath and extreme fatigue. Although the infection may not be fatal but proper medications and care is the utmost requirement, according to a latest study conducted by the Washington University School of Medicine in St. Louis.

The parasitic worm is oval in shape and about half an inch in size. The investigators claim that the worm begins its journey from the intestine to the lungs and may end up reaching the brain. This can possibly cause severe headaches or vision problems. Small nodules may appear to move just under the skin.

Gary Weil, MD, Washington University infectious diseases specialist, professor of medicine and of molecular microbiology explained, “The infection, called paragonimiasis, is very rare, so it’s extremely unusual to see this many cases in one medical center in a relatively short period of time. We are almost certain there are other people out there with the infection who haven’t been diagnosed. That’s why we want to get the word out.”

The scientists explained that the intake of praziquantel, three times a day for only two days may help to overcome the disease. They further suggest that consuming crayfish after completely cooking it does not lead to an infection. Furthermore, the present day antibody test is capable of analyzing Paragonimus westermani infection, but is unable to indicate the presence of P. kellicotti parasite. This leads to confusion and the physicians are unable to determine the accurate treatment for the infection.

Michael Lane, MD, an infectious diseases fellow at the School of Medicine, shared, “Some of these invasive procedures could have been avoided if the patients had received a prompt diagnosis. We hope more doctors will now have this infection on their radar screens for patients with an unexplained lingering fever, cough and fatigue.”

The authors enlightened that an increase in the levels of white blood cells called eosinophils is probably reported to be associated in the patients carrying this infection. But it should be realised that the same increase is also found in patients with cancer, autoimmune disease and allergy.

Recommending the patient for an X-ray can appear to be beneficial as it indicates excess fluid around the lungs or heart. The investigators will be conducting further studies on the parasite to determine accurate medications and tests to be undertaken in order to cure the infection.